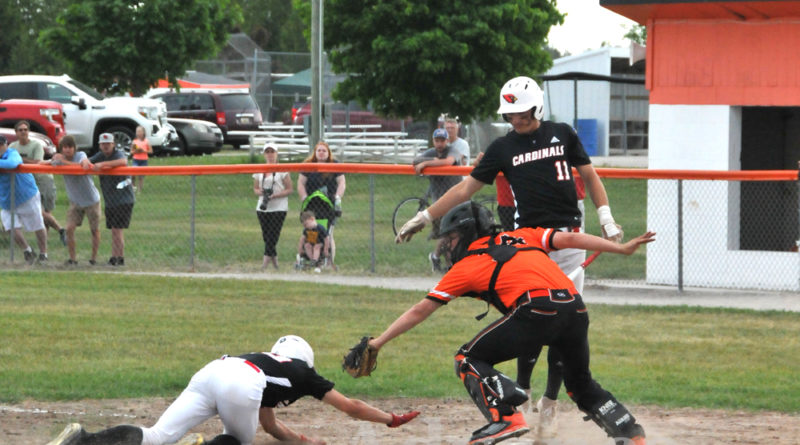 Division 4’s third-ranked team was sent packing from the state playoffs last Saturday as Rogers City (16-19-1) made a couple of early runs hold up in a monumental, 2-1, upset over Johannesburg-Lewiston (Joburg) that gave the hometown team a district title.

Holding on to that slim, one-run margin in the bottom of the seventh inning, the Hurons escaped a one-out bases-loaded jam.

A sharp grounder was hit right to third-baseman Drew Flewelling, who went home to catcher Dylan LaFleche for the force out at home and out number two.

When the next batter came up, the Joburg runner on third tried to steal home to tie the game, but interference was called on the batter, who did not get out of the way on a bang-bang at the plate.

“The umpires told me that the runner was out with the tag, but the batter interfered beforehand,” said Hurons’ coach Eric Brege, who got the biggest win in his high school coaching career.

Mitts flew in the air and Evan Fairbanks, who pitched a masterful seven-inning game for Rogers City, leaped high into the arms of his head coach along the third base line.

As the Hurons celebrated, there was utter disbelief on the Joburg side of the field. The runner trying to steal home just laid there on the ground, not willing to face the fact that a team they had mercied twice earlier in the season had just knocked them out of the postseason.

After the traditional trophy pose, Fairbanks and the rest of his teammates ran the fence line with the district trophy high in the air.

“If we throw strikes, we can compete with anybody,” said Brege. “We hit the ball well, we fielded the ball well. We struggled all year with throwing strikes. I told Evan, if he shows up, he can carry this team. He pitched a dandy.” He allowed only three hits and struck out 10.

Rogers City seized the momentum early with Dillon Cook, LaFleche and Matt Wilbert walking on 12-consecutive balls. It was Cook scoring the first run on a passed ball and the Hurons were a fired up bunch.

Joburg had used its best pitcher Sheldon Huff to defeat Hillman earlier in the day and the Hurons were creating havoc against their number-two arm.

In the top of the second, Fairbanks walked with two outs, stole second, went to third on another passed ball and came home on Cook’s hard ground ball to second for a 2-0 lead.  The team was even more fired up than the previous inning.

The Hurons had to play defense to make it stick.

In the bottom of the fifth inning with two out and a Joburg runner at third, Nic Tulgestka ranged off of first to scoop up a grounder, and right from the crack of the bat, Fairbanks was in motion and took the throw from Tulgestka to get the out at first.

In the next inning, Fairbanks battled through a little wildness, walking a batter and going 3-1 on the next. With a runner at second, there was a controversial play at first as Tulgestka took a throw at the bag, dropped it and then picked it up for the second out, just about the same time he was run over by Huff.

The runner from second scored during all the commotion for a 2-1 score and setting up the dramatic final inning.

As hearts beat out of the chests of family and friends and others paced behind the dugout, the first Joburg runner got on a slow grounder to short. The next batter hit a sharp grounder to Fairbanks, but when he turned to throw to second for the force out, nobody was there yet. When he threw the ball, it was dropped.

With runners on first and second, the next batter clearly missed a bunt sign to move the runners as the head coach at third and players on the bases chirped at the batter. Fairbanks would get him on strikes for the first out, and no doubt, it was the biggest K of his young career.

It got even more uncomfortable in the Rogers City dugout when Fairbanks walked the next batter on a 3-2 pitch.

The bases were loaded with one when Flewelling made the play at third and the steal attempt of home was the game winning out for the orange and black.

The Hurons moved on to a regional semifinal game back on the home field against Gaylord St. Mary, who defeated Onaway last Friday, 12-1, for a district title. St. Mary topped Rogers City 11-5 ending the Hurons’ season.

opped Posen 22-4 in the opening game of the districts. The Hurons scored 11 runs in the first and 11 more in the third inning, taking advantage of eight hits and 16 walks issued by Posen’s pitchers.

Fairbanks, LaFleche and Tulgestka each had two hits while LaFleche drove in six runs. Fairbanks and Cook each scored four times.

Isaac Hein took the win on the mound, allowing five hits in two innings while Tulgestka worked the final inning striking out two.

Chase Dubie had two of the five Posen hits. Lucas Stone, Ethan Romel and Joey Konieczny had the other hits for Posen. The Vikings had two costly errors that accounted for eight unearned runs in the contest.