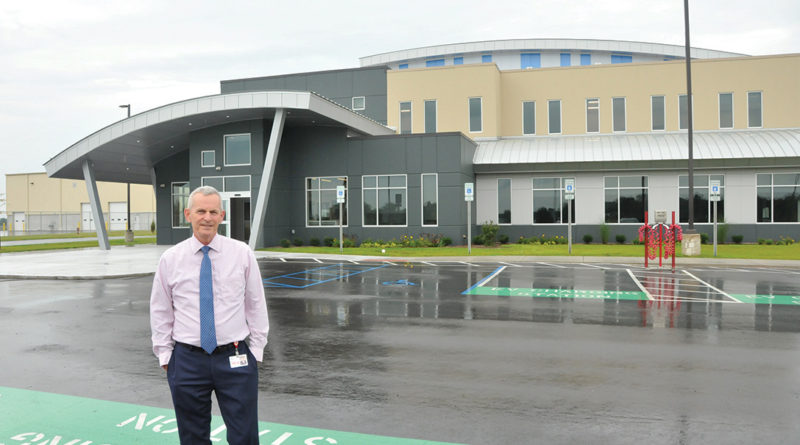 It has all of the modern amenities needed to run the utility now and into the future. It also has a futuristic look, but it has not forgotten the past with historic photos decorating many walls and stairways.

And now the employees of the cooperative are ready to move in. A better word is, itching to take over the grand, $22 million facility.

PIE&G broke ground in April 2020, had some delays due to the novel coronavirus pandemic, but now is ready to open. As of Monday, there were about 22 people actively working in the building and slowly but surely the process of moving the rest of the crew over is underway.

“It was no easy decision and much was considered along the way,” said Tom Sobeck, PIEG president/CEO in regard to the board of directors recognizing the need for the new facility.  “Their resolve and commitment to northeast Michigan is to be commended. If it wasn’t for the board, this project would never have been undertaken.”

A ribbon cutting is set for Tuesday at 2 p.m. at the front, sliding doors, several hours after the board’s monthly meeting in the grand, community room. And then the public will be invited to tour the facility. Wall-to-wall, from east to west, it’s 862 feet and a quarter-of-a-mile around the entire building.

“We are going to direct traffic to the back, where there is more parking,” said Sobeck of the open house. “We will have some snacks and water back there and then we will have the leadership team guide them through the building for tours.”

Getting the 60 plus PIE&G vehicles under one roof was one of the priorities and will soon become reality. There will be no snow to brush off or ice to chisel away when co-op members need their electricity turned back on.

The vehicles will be housed inside and be ready to go. That was not the case in the facility that the utility has been calling home since 1955.

There are futuristic desks; spacious break areas; and plenty of space for the new division, PIE&G Connect, that will start serving high speed internet throughout the region.

The facility was constructed at the under-utilized Leo E. Goetz Airport.

Part of the runaway still exists, and even though planes will no longer land there, or run into the building, Goetz’s name is still being honored with a road that bears his name on the north side of the facility.

“We are on track to be at, or slightly under the original budget,” said Sobeck.

Regarding rates: “We projected that the building, along with our automated metering infrastructure project and traditional electric and natural gas system expansions and upgrades would cause a $5 to $10 a month increase on a typical residential bill. I am hopeful it will be closer to $5. Right now, it is a $1.92 a month,” said Sobeck.  “The average home in our area uses about 670 kilowatt hours a month. Based on that average, it is $1.92 a month. If you use more than that, it will be more.”