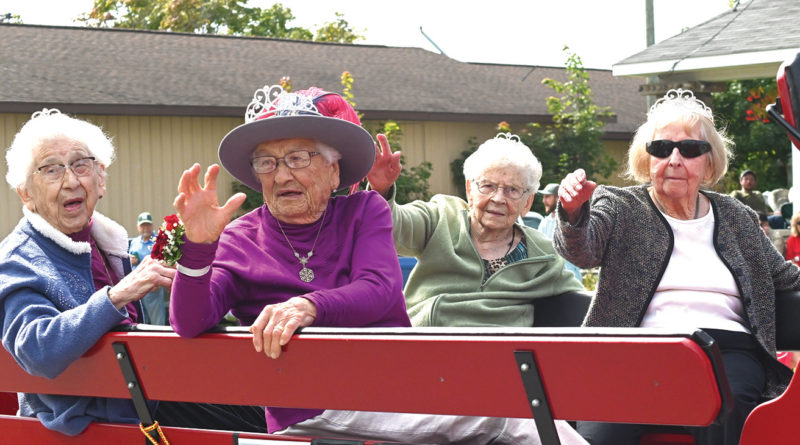 The first Posen Potato Festival (PPF) since the novel coronavirus canceled countless community events around the world was like old times in the tiny village with people kicking up their heels, eating, or getting thoroughly entertained at the packed field events.

The 70th PPF was dedicated to the memory of the voice of Posen Randy Idalski, who passed away unexpectedly earlier this year.

Even though he retired from the Posen Chamber of Commerce a few years ago, he was still the master of ceremonies at most events, including the parade and the Miss Posen pageant that did not take place.

A wooden plaque was unveiled during the opening ceremonies last Friday by Posen Chamber of Commerce president Andrea Konwinski. It will go up on the wall of polka pavilion.

It was a festival not at 100 percent with no Spud Run or Rosary Sodality breakfast, but it did not keep people away from the sights, sounds and smells that keep folks coming back.

Parade grand marshals Jim and Lorraine Smigelski were treated to breakfast at the Veterans of Foreign Wars Post 7804 Sunday before their big moment in the spotlight. The centenarian princesses, Verna Bruski, Stella Smigelski, Sophie Zyracki and Virginia Smigelski also were given the royal treatment.

“Everyone seemed to have a good time,” said Konwinski. “Comparing things to two years ago, we don’t have numbers yet. As a board we have not sat down to talk because we have been so busy cleaning up and I think we are so exhausted. At the next meetin

g, we will hash things out. Overall, I did not hear any complaints.”

Native Amusements out of Port Huron took over this year and reported a good weekend. “They enjoyed the area and their weekend,” said Konwinski. “Tommy K went well, the place was full. Friday night at the polka pavilion, I would say it was average, as well as Sunday. Years ago, it was shoulder to shoulder, but it was still a nice crowd in there. Saturday afternoon, it was a wonderful crowd in there.”

Konwinski said the field events were filled most of the weekend.

The parade winners are as follows: