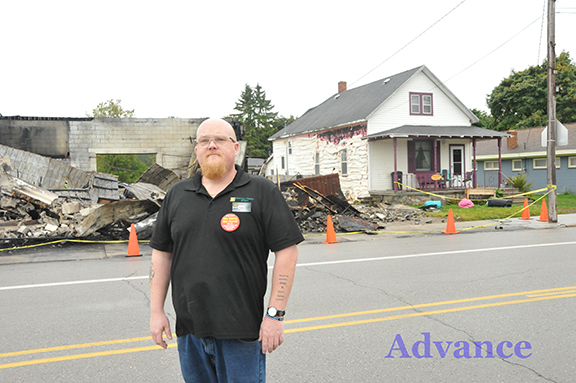 One never knows when we will be placed in the right place at the right time to possibly save a life or two, or even more. For Jim Haske of Rogers City, it’s crystal clear.

He was getting off of work Sept. 28 at about 10 p.m. when the building across the street became fully involved in flames. On each side of the building were homes in close proximity. Haske got them all up and out.

Since the fire, customer after customer, has been hailing the longtime employee of the Blarney Castle, BP gas station as a hero, and deservedly so.

John Rasmussen and his family were in the south house and know it was much too close.

“I’m glad everyone is safe,” said Rasmussen. The family of five was sound asleep as the building next door was going up in flames.

“I’m usually in bed at nine or a little earlier,” said Rasmussen, who is the manager of the gas station where he and Haske work. There were four people in the north house.

“Jim got us out at 9:55 p.m.,” said Rasmussen. Patron Wyatt Romel was the last customer of the day and saw the flames coming from the roof.

“It was just before closing and I was just getting stuff wrapped up and he said ‘that building across the street is on fire,’ ” said Haske. Romel said he would call 911.

“You do that and I will get everyone out of the houses,” said Haske. “I pounded and pounded and pounded on John’s door for what seemed to be 10 minutes. I was thinking, am I going to have to break the window. That last time, I heard a dog bark. I said, ‘yes, that is going to wake them up.’ ” John and his wife Sheila took a quick look over and got everyone and their pets out, as Haske ran over to the Roznowski house on the other side.

“They were still awake,” said Haske. “I pounded on their door and Dave Roznowski says, ‘what’s going on.’ I said ‘your garage is on fire, get everyone out now.’ He said, ‘it’s just my woodstove.’ ” After a firsthand glance, he saw it was something much more.

“After they got out, there was the first explosion, the small one,” said Haske.

An off-duty firefighter from Detroit heard it on the radio, grabbed Rasmussen’s keys and moved their vehicle from the driveway between the house and the burning structure or it would have been destroyed.

“That’s when the big explosion occurred,” said Haske. “There were fuel tanks in there. He had tanks for his bump-and-run cars. It went up fast.”

Many, many years ago, it was Johnny’s Service, selling Sunoco gas. It was owned by John and Martha Misiak, who lived in the adjacent house. The building was renovated in 1964 and a shell of that building was standing earlier in the day of Sept. 28 and now is in rubble.

Haske said, “I just thank God that he had me here and he had Wyatt come. Had the store been closed, maybe they would not have made it out.

“Once they were safe and I came back in here (the gas station) I did take a deep breath and thought to myself, everyone is alright. I said a prayer, thank God, He had me in the right place at the right time. It was divine intervention.”

The damage to Rasmussen’s home is more significant with siding melted on the north side, along with damage to his roof. It will all have to be replaced.

“There was smoke damage,” said Rasmussen. Part of the roof of the garage landed on the roof of his vehicle and bubbled the top. “When glass busted, it hit the car,” he said.

Posen Area Fire & Rescue suspect the cause to be electrical and it will be listed as accidental.