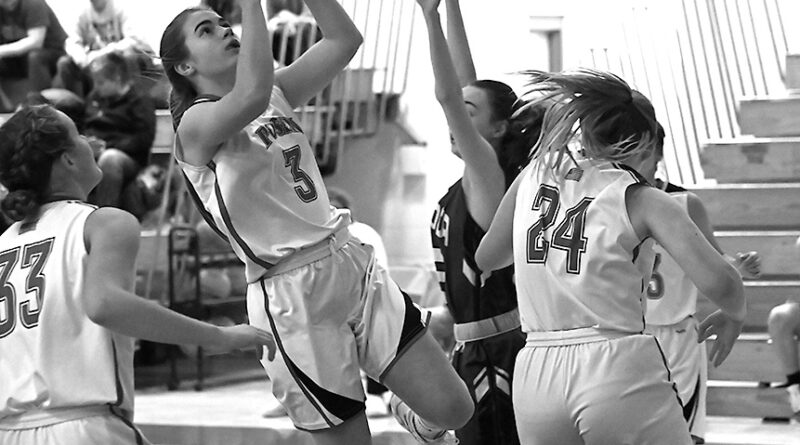 “We tried to limit as many of the 3-point makes that we could and we did a good job on defending the 3-point shot. They had some open looks and they are going to get some open looks. That is a real good team that we played,” said coach Karl Momrik.

“We wanted to schedule Oscoda because we wanted to know where our team was at and if it could compete in the regional tournament. We feel that we have that and we showed that tonight,” Momrik said.

Posen tied the game on a basket by Makayla Kamyszek off a rebound of her own missed shot. With less than 10 seconds left in the game, trailing 43-41, point guard Faith Cousins dribbled to the left of the key and rocketed a pass to Kamyszek in the paint to the right of the basket. Kamyszek missed her first try, but added to her team-high 16 rebounds and then banked the winning shot off the glass.

Kamyszek took over in the overtime period, scoring eight points including the first six Vikings’ baskets in the extra frame. Cousins hit a free throw with 1:10 left in overtime to give Posen a 50-46 lead. Kamyszek added to the lead with a basket after a rebound and free throws by Elizabeth Romel and Abi Schellie made the score 54-46 with 21 seconds left in overtime.

Oscoda was content to launch 3-point bomb after bomb, connecting on just six in the game, with two falling in the overtime period.

The game went back and forth the entire way. Trailing 13-9 with 2:45 left in the first quarter, free throws by Ella Szatkowski and Ava Wesner, along with a jumper from Wesner, off a nice pass from Sofya Hincka, knotted the score at 13-13 at the end of the first quarter.

The second quarter found the score tied three times before a 15-foot shot gave Oscoda a 24-22 lead at the half.

Trailing 28-24 with 5:46 left in the third quarter, buckets from Szatkowski and Kamyszek came before two baskets from Hincka, giving Posen a 32-28 lead. Oscoda became ice-cold from beyond the 3-point arc missing seven attempts in the early-going of the second half. Posen led 36-35 after three to set up an exciting finish.

Kamyszek, who sat out large portions of the contest with foul trouble, paced Posen with 23 points and 16 rebounds. Szatkowski scored 14 points and Hincka had six points. Cousins had seven assists.

Posen plays next at Atlanta Jan. 7, 2022 in a change to the last updated schedule.

in win over Fairview

A pesky defensive effort sparked a 52-23 win for Rogers City (2-2) at Fairview Friday. Freshman guard Brooklyn Orr made four steals on the Eagles’ first four possession to set the tone for a great effort for the Hurons. One steal lead to a breakaway layup and Kaitlin Nowicki had three field goals as the Hurons broke out to an 8-0 lead.

Fairview finally got on the scoreboard with 1:27 left in the first quarter as Rogers City limited scoring opportunities while dominating the boards. Freshman center Alivia Freel picked up the scoring pace in the second, notching six of her game-high 16 points in the frame. With the Hurons leading 16-7 with 3:45 left in the second quarter, Ryleigh Talaske started a 9-0 run with a jumper to end the first half with Rogers City leading 25-7.

Alyssa Jo Hein had a 3-pointer and a short jumper in the run with Orr adding a breakaway layup after another steal.

Fairview closed the margin to 29-13 before another run from the Hurons. Two buckets each from Freel and Nowicki came ahead of a basket from Morgan DeBoar to stretch the lead to 39-13.

Rogers City hit on 3-of-4 from the free-throw line while Fairview did not attempt a free throw during the game.

“I was most pleased with how we shared the ball. The rebounding was better and we got on it on the offensive side. On defense there was a lot of good things going for the majority of the game. I was happy with the finish to this part of the season before we go to Christmas break,” said coach Duane Pitts.

“We were a lot more active. Hopefully we can be a little more aggressive but be smart aggressive so we are not in the wrong spots.”

Joburg gets away with one in Onaway

The opportunity to knock off one of the top programs in the Ski Valley Conference was there for the taking, yet the Onaway girls’ basketball team (3-2, 3-1) could not come up with a final push down when it was needed most in last Thursday’s 46-38 loss to Johannesburg-Lewiston (Joburg).

Two of Joburg’s best players fouled out in the fourth quarter, the first one with less than four minutes remaining.

Taylor Larson’s jumper with just over two minutes to go, got the home team within six, 43-37. Moments later, a second Joburg starter went to the bench with five fouls and Charlotte Box went to the free-throw line and made the second of two with 1:32 remaining.

The deficit was at five, 43-38, and add on to that, Onaway got another possession with Joburg being called for a 3-second lane violation.

Unfortunately, Onaway had two missed shots and two turnovers on four-consecutive possessions and were outscored 3-0 in the final minute.

“We had so many opportunities from 10 foot in,” said Onaway head coach John George after the game. “We have to make good shots to beat a good team – and that’s a good team.”

Two days before, George said he wanted to be considered among the conference’s elite teams.

“We let a good team get away from us tonight. It is a game we should have won, there is no doubt about it, everybody in the gym knows that,” said George. “We just did not do it.”

ad scoring only three points and getting down by seven, 24-17. In the third quarter, Onaway was 4-for-11 from the free-throw line and spun their wheels with a double-digit deficit until the late rally. The loss put an end to a three-game winning streak.

Box was the leading scorer with 11 points, while Larson put in 10, including a 4-for-4 night from the free-throw line, all in the second half.

“It was not due to a lack of effort,” said George. “We really played really hard tonight, just a couple of important things we did not do well. Rebounding was bad and we really struggled making shots.”