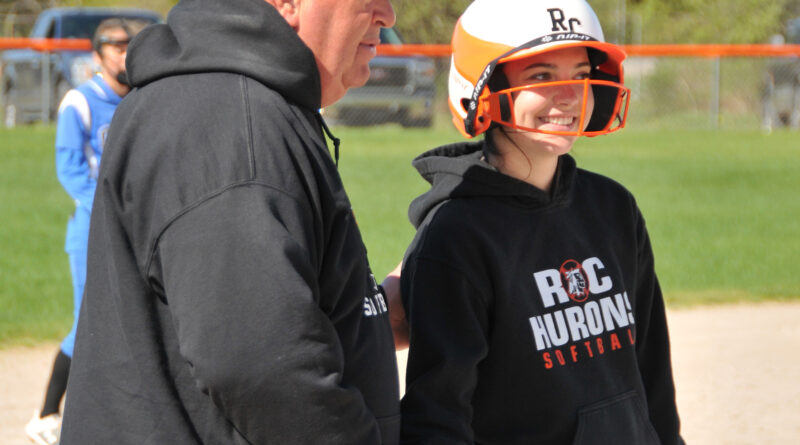 On the brink of a milestone, Grambau fans out the credit

There are 86 softball coaches in the state of Michigan that have won 500 ballgames and Rogers City softball coach Karl Grambau is poised to become the 87th name on that elite list.

Monday, the Hurons took game one of a doubleheader over Oscoda to hand the coach his 499th career win, but the Lady Owls came back to get game two, leaving Grambau one win away from this impressive milestone.

The win in first game over Oscoda clinched the program’s seventh-straight conference championship. That was far more important than another career win, but down here at the local paper, we love to talk about this stuff, so here we go.

On Wednesday (past press time), Grambau and the Hurons were taking on their Division 4 archrival Inland Lakes (IL), in search of not just one, but a couple against the Lady Bulldogs.

(UPDATE: The Hurons defeated the Bulldogs to give coach Karl his 500th win)

To be honest, it’s a huge rivalry.

For example, the year after the Hurons won the state title in 2014, IL eliminated the Hurons in the 2015 regional final and quarterfinal games in 2016 and 2017.  In 2018, the Hurons struck back by eliminating the defending state champs in the regional tournament and got them in districts last season.

Wednesday was the first time the two teams met in the regular season since 2003, when Grambau took the reins of a great program built by coaches Jerry Chrzan and Charlie Fairbanks, and of course one of the best Little League programs in northern Michigan. Grambau would much rather give credit to others.

“I inherited a great program and I have had a lot of great kids that I have had an opportunity to coach and I’m very thankful for that,” said Grambau. “Also, our Little League program in Rogers City keeps our program going. They get the kids turned onto softball at an early age and I appreciate everything our Little League program has done for us.” He also credits all the volunteer assistants that he has worked with.

Another key to the success has been the abi

lity to have the numbers to field a junior varsity (JV) team.

“We have consistently had a JV team coached by Amanda Karsten,” he said. “She also helps us with the varsity every day. Both our JV and varsity have the same type of practices every day and the consistency helps.”

Grambau is 100 percent spot-on with every point, but enough with the deflecting for a moment.

e backbone of the program for more than two decades and is deserving of some credit, too. He is a class act that is always working behind the scenes on fundraisers to pay for the longer trips and provide the best equipment.

And don’t be fooled by that calm demeanor in the third-base coaching box, because he has always had a strong desire to win.

Plus, he knows when to push the right buttons and say the right thing. And when drama has presented itself, he has been really good at snuffing that out, too.

If you see Karl, if and when he gets that 500th win, do what we do best in a small town, congratulate him in person with a smile and a handshake, but thank him for his dedication as well.