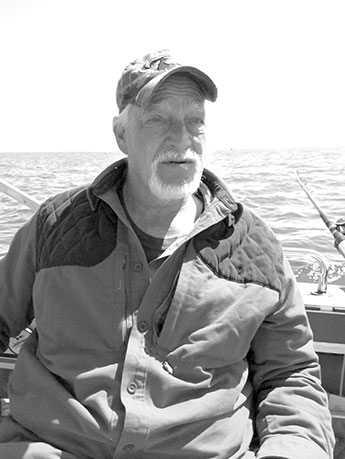 Raised in Mayville, Randy’s love for northern Michigan began as a kid when he spent summer vacations at his grandparents farm in Onaway.

After working as a millwright for General Motors Co. and running his own welding business, Randy decided northern Michigan is where he wanted to be and moved permanently to the area. He worked as a mechanic in Millersburg and for Great Lakes Power and Pipe. Randy was a member of the Millersburg Fraternal Order of Eagles where he volunteered whenever he could.

An avid outdoorsman, Randy enjoyed deer hunting and loved fishing. Whether fishing salmon, steelhead, or lake trout on the Great Lakes or fishing one of the many small inland lakes in the area, Randy was quite happy with a fishing pole in his hand. He loved roaming the woods in search of morel mushrooms each spring and watching elk when they came into the fields where he lived. Randy cherished his Harley-Davidson motorcycle and enjoyed many long distance trips on the bike.

For Randy, it didn’t get much better than riding through the Smoky Mountains on his Harley. In more recent years, he enjoyed spending winters in Florida and returning to Onaway to spend the beautiful summer months with an occasional camping trip to the U.P. (Upper Peninsula).

Quite a character, Randy always had a story to tell about something. Sometimes his stories were a little hard to believe, but for someone who lived life to the fullest, as Randy did, perhaps they were mostly true. He was a bit of a flirt who knew how to turn on the charm and had a big heart for helping others. He had a tender place in his heart for his rescue cat, Tigger, who he absolutely adored. Randy will be remembered for doing things his way and for having a great zest for life.

, Jim and John Carr; as well as Penny’s sons, Will LaFave (Stephanie Grossman) of Onaway and Raymond (Allyson) LaFave of Massachusetts.

Randy was preceded in death by his father, Allan; his mother, Marge Carr; a son, Mark; and a daughter, Samantha.

Those planning an expression of sympathy please consider a donation in memory of Randy to the Cheboygan County Humane Society, 1536 Hackleburg Road, Cheboygan, MI 49721.