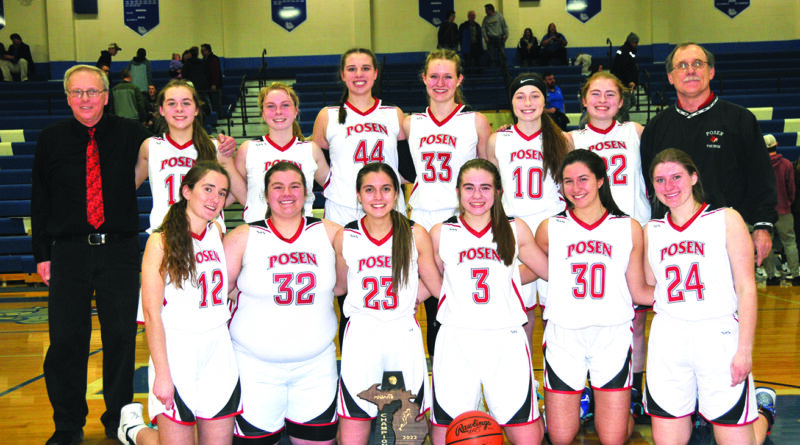 After 15 incredible seasons, Posen girls’ basketball coach Karl Momrik has decided to retire from coaching. At 65, he decided the time was right to step down after averaging 17 wins a season and compiling a record of 253-79.

Momrik and the Lady Vikings were one win away from claiming the program’s second regional championship back in March.

That loss to Pickford will be the last game coached by the 1974 Posen High School graduate, who will rank right up there as one of the greats at the school.

He made the announcement Thursday, but on Monday from his home along U.S.-23, he talked about going out on top.

“It was a great run, but it was just time to give it up,” said Momrik. “There is a lot that goes into coaching. Doing it 10 months a year, you don’t get a chance to do much else.

“I’m leaving on a good high. We won five-straight conference titles and three districts. Whoever comes in and coaches now, it’s far from an empty cupboard — we have some good players coming back, and I thought it was a good time to leave.”

Momrik, who was blessed with some of the best players in the history of the program, won 11 North Star League (NSL) titles and nine district titles to go with one regional championship, the only one in the school’s history. There were five players to reach the milestone of 1,000 points in a career in the Momrik era and one to make it to 2,000 points. There were six players that made Associated Press all-state.

A new chapter of winning

The Vikings were already winning games and district banners before Momrik took over for Tom Schellie in 2006. Mary Calhoun and Roxann Hincka, who both scored 1,000 points each in their illustrious careers, graduated before Momrik arrived.

“It was a whole new cast that first year for me and I was the only one that applied,” said Momrik. “For a rebuilding team, we went 9-11 the first year and I thought that was OK.”

With a lot coming back, it was 17-3 the next season and the coach’s first conference title.

The success seemed to feed on itself from the lower ranks all the way to the varsity.

“A lot of people thought I was going to leave after Korynn left,” said Momrik. That was eight years ago.

Two years after Korynn Hincka had left and was playing collegiate ball at Grand Valley State University, the Vikings went 21-3.

Momrik is the son of Alexander and Evelyn Momrik. Alexander passed away in 2007, while his mother died a week after the heart attack he suffered during a regular-season game in 2010.

“You might want to mention that I’ve lost a couple of friends in the last month,” said Momrik. “It may have expedited things a little bit for me.”

Momrik was talking about the loss of legendary Posen baseball coach Pat Kowalski, who died with his wife Barb in a tragic auto crash three weeks ago. Before that was the loss of an even closer friend, former coach Joe Farkas.

“For me, I realized that time is precious,” said Momrik. “You have to get out there and do something different.”

Retiring will give Momrik more time to watch the stacks of DVD movies that fill his house and to hit more garage sales. He has the movies sorted into a few different categories.

There are sports’ movies, of which he owns 150 of them. They are jammed together in a special spot on a shelf. His favorite sports movie is Kevin Costner’s “Draft Day,” but he can recommend many others.

There are stacks of keeper DVDs lining his living room wall and ones to still watch that fill a backroom.  He is constantly adding to his collection, but it’s not the only item he might bring home.

He has a collection of wine glasses and beer mugs. There are duck sculptures, baseball cards and even a vintage book on how to win at poker.

When Momrik graduated from Posen, he attended the Specs Howard School of Broadcasting in 1976 in suburban Detroit and then came back north and worked at WHSB in Alpena and WHAK-AM, Rogers City for a combined five years.

After that, he went to work as a health physics technician in the nuclear field and traveled all over the country.

“From there I moved to Las Vegas, busing tables, just to be able to stay there,” said Momrik. “As I was busing tables on one of my day’s off, a girl came up to me and asked me if I wanted to take a dealer qualification test.

Momrik took a 50-question quiz, but only completed 48 of them.

“I was ready to head out, but she told me I got all 48 right. The scores are usually in the 20s,” said Momrik. He decided to give it a try, went to dealer school, and broke in at the Gold Spike. He ended up at O’Sheas Casino on the strip for three years, before working a decade at the Flamingo Hilton.

Later he worked as a casino detective and then as a national scouting report part time, assisting athletes receiving scholarships in Las Vegas. Additionally, he worked in marketing, before coming back home when his parents became ill in 2006.

Those close to Momrik know he loves numbers, so as a test, he was asked to recite some off the top of his head.

There always was the difficult time when he brought up Hincka as an eighth-grader to join the varsity.

“She was the first,” said Momrik, “And I faced a lot of heat. In retrospect, it was the right thing to do, and I stand by that decision.”

More importantly, it paved the way for all the eighth-graders who have come up after her at the small public school, including the next one, Cami LaTulip, who came into the regional title game against Brimley to hit two free throws when Korynn Hincka was knocked out of the game with an injury. She also hit a field goal in the game and the Vikings went on to get a regional title that had been elusive for decades.

regional title game ranks right up there in the top three moments along with the regional semifinal loss of 2013 to St. Ignace.

If it was not for St. Ignace moving from Class C to D that year, one can only dream of how far that team could have gone in the tournament.

The second was the regional title win, 56-37, over Brimley.

The third game is the district championship won this last winter over Inland Lakes when Makayla Kamyszek scored 40 points.

“I’d like to thank all of my players who have made this run possible for me. I especially want to thank my assistant Kevin Romel, who was right by my side these 15 seasons, and my sister Kathy for shooting videos,” said Momrik.