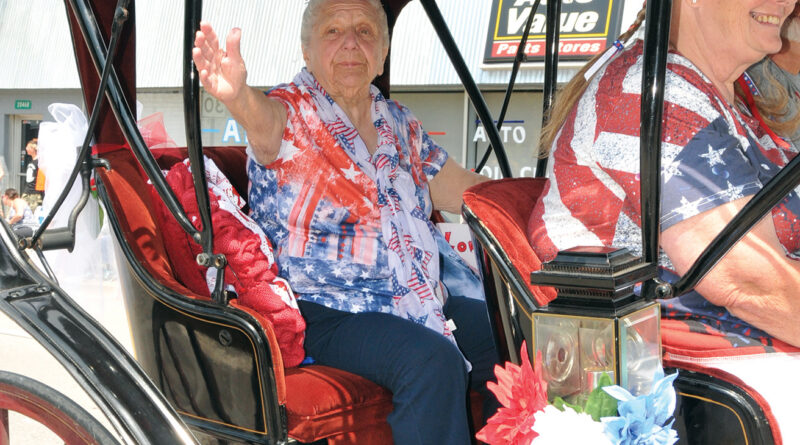 Fireworks capped another Independence Day celebration in Onaway with rain holding off enough that the annual light show could go off as planned.

Earlier in the day, the weather was perfect for the parade with locals and visitors alike, lining the parade route along Washington Avenue and State Street.

The Presque Isle County Sheriff’s Department was at the head of the parade followed by members of the George C. Garms Veterans of Foreign Wars Post 5857, who marched and rode on a float. They stopped four times along the parade route with Taed Price and Marge Skinner leading the singing of the national anthem, while the Girl Scouts from Troop 8671 recited the Pledge of Allegiance for everyone to join in, before the parade resumed.

Not far behind was grand marshal Kaye Porter, a lifelong resident enjoying her ride in a horse-drawn buggy, waving to the hundreds of parade goers.

While there was no entry from Tom Moran of Moran Iron Works, who has introduced larger-than-life metal floats for decades in the parade, students from the Industrial Arts Institute showed off an Ironman bust from Marvel fame in the back of a pickup. It was easy to see the colorful metal creation was putting some weight on the back tires.

Moran, who is the founder of the welding school, said it made a lot of sense for the students to make something this year because it promotes the school.

“It was a great project that engaged students and actually taught them skills beyond what textbooks can offer,” said Moran. “The workmanship is good. The teamwork, even better, and artistic input is nothing short of great given the experience level. I am proud of the accomplishment and proud of the students and instructors.”

Moran admitted he is not out of the float making business.

“I still have a few left in me,” he admitted.

Parade ambassador Petey Szala also was back again, hoisting up his bottle of water in the air to all for all who acknowledged one of the true cha

racters in the Onaway community.

Before the parade had come to a conclusion with the Onaway department of public works picking up no parking signs along the parade route, the Onaway and Forest Waverly fire departments were already dousing people with water, or at least any brave ones that would get close enough.

The water fight went to the Onaway Fire Department, 5-4, after Forest Waverly, went up 2-0 at the start. It will bring the trophy back to Onaway.

The Onaway Community Chamber of Commerce want to commend the sheriff’s department, John Palmer, Mac Morgan and the firework’s crew, the grand marshal Kaye Porter and all the people who decorated floats and that were in the parade that help make Onaway be The Best Fourth in the North,” said chamber secretary Yolanda Romel.