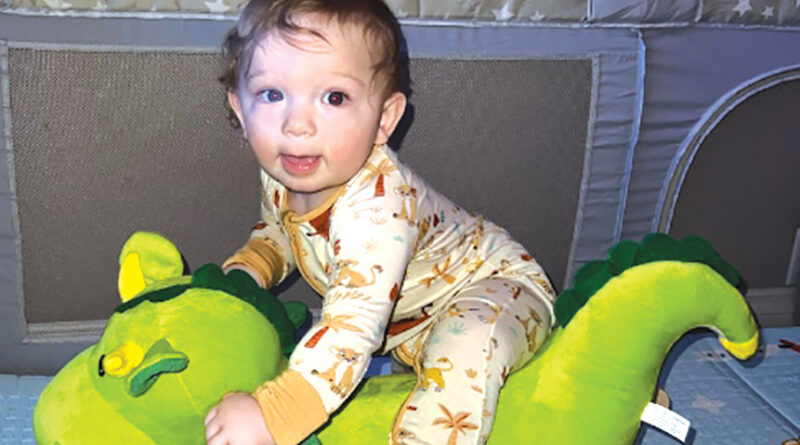 Staying with recent tradition, the Presque Isle County Advance/Onaway Outlook checks in with the family of the reigning New Year’s baby.

That honor went to Hayden John Harrington, son of Joshua Harrington and Kaitlin Kortman, who was born into the world, Jan. 16, 2022 at 7:06 p.m. He was officially Presque Isle County’s first baby. Kaitlin was in labor for 39 ½ hours, but was able to give birth to a healthy baby weighing 5 pounds, 14.6 ounces, measuring 18 ½ inches.

Hayden enjoyed his first Christmas and now prepares for that special first birthday. He is close to walking, according to his mother Kaitlin, and is already talking.

“His first word was ‘mama,’ and shortly after started to say ‘dada,’ it melts our hearts,” said Kaitlin. “He is such a smart boy. He already has eight teeth.”

Hayden’s favorite toy is a trampoline he received for Christmas.

“He had so much fun ripping up the wrapping paper,” said Kaitlin.

His family received some fine gifts from many merchants and were able to enjoy the majority of them in 2022. “We can’t thank our community enough!”

Hayden’s grandparents are Theresa and Kevin Kortman of Rogers City; and Ernest Harrington of Oden.

In the meantime, the clock started ticking at midnight Saturday night in the wait for the 2023 New Year’s Baby.

At the early part of the week, there were no signs of the stork, but waiting in Presque Isle County is more of the norm.

In 2011, New Year’s baby, Roland H.W. Schaudt, was born Jan. 26 and didn’t get reported until the first edition of the paper in February.

The year before, Nash Donajkowski was born Jan. 13.

To be considered for the “first baby award” rules state that entries need to be submitted to the Advance office within 48 hours after the child’s birth.

Additionally, a written statement by the attending physician, or birth certificate must accompany the exact time of birth.

Advance operators are waiting by the phones at the corner of Third and Erie in Rogers City for the call that will end this year’s first baby contest, and as of early Wednesday morning that call still hasn’t been received at (989) 734-2105