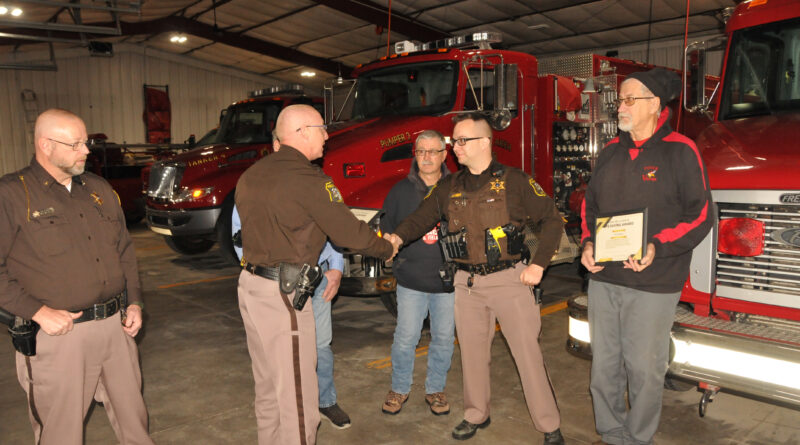 In the week leading up to Christmas, two Posen men received certificates of recognition from the Presque Isle County Sheriff’s Department and Posen Area Fire and Rescue (PAFR) for their actions 11 months ago that saved the life of fellow Posenite Tom Meyers.

Meyers was injured in an on-the-job accident at Cadillac Products Automotive Company of Pulawski Township.

Ataman was working directly across from Meyers at the plant, Feb. 18, 2022, when the accident occurred and made a primitive tourniquet out of rope.

A tourniquet is a device that is used to apply pressure to a limb or extremity in order to stop the flow of blood. Leedy followed up with a department-issued tourniquet he carries with him on his belt.

For both men, it was the first time in their lives they had applied a tourniquet in a real-life scenario.

“We did research on this incident and they saved his life,” said Brewbaker. “Going into a situation that is so rare to happen, and nobody wants to deal with. They jumped in without thinking and did what they had to do.

“It’s called muscle memory — that’s why we train. That’s why police, fire and ambulance personnel train all the time. John knows that man, he works there, tough situation.”

Meyers gracefully declined an invitation to be at the fire hall for the ceremony.

“Tom is beyond appreciative of what they did that day,” said Brewbaker. “The entire Meyers’ family is appreciative. Even though he lost his limb, he’s here and he’s such a great guy.”

PAFR fire chief Raymond “Burke” Wozniak echoed the sentiments of the Meyers. “Tommy is my nephew and I am very appreciative.”

“He is in the process of getting a prosthetic,” said first responder Chuck Wozniak, who attended the ceremony. “Tom is my cousin and was my next-door neighbor growing up. I know him very well.”

Ataman heard Meyers call for help, and not knowing there was a tourniquet in the factory first aid kit, used the rope. Leedy responded from the sheriff’s department.

“I just did what I was trained to do,” said Leedy. “I could see there was a catastrophic injury and the high-potential for arterial bleeding. I saw that John had the rope on there, and while effective in the interim, I knew a commercial tourniquet would be the most beneficial. It’s a lot tighter and a lot wider.”

“Luckily, I was there,” said Ataman, “And not because he is my neighbor and I know him.”

Both men would have did it for anybody.

Ataman was a first responder for 25 years before work obligations prevented him from continuing his training, while Leedy is a new member of the Posen community and works as the Posen Consolidated Schools school resource officer.