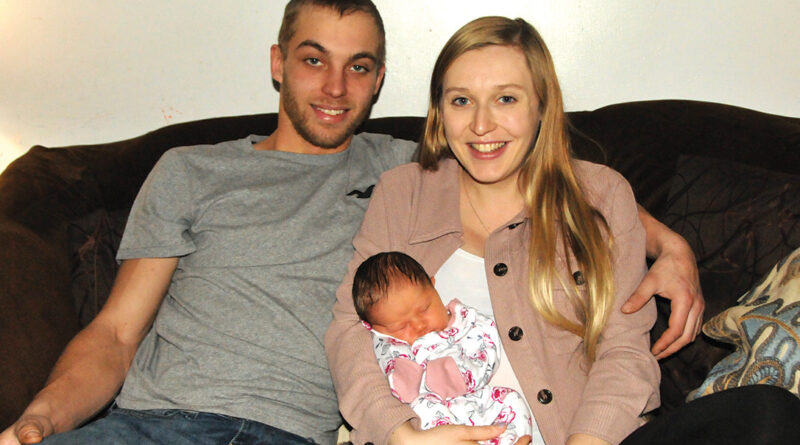 Late in the fourth day of 2023, Presque Isle County’s New Year’s baby was welcomed into the world, and for the first time in many years, it’s a baby from Posen. Pulawski Township, northwest of Posen, to be more exact.

Lainley Rae Davis, the daughter of Lauren Romel and Kylee Davis, was born at MyMichigan Medical Center of Alpena where Lauren is employed as a registered nurse.

In fact, Lauren was working on the morning of Jan. 4 when her labor started at 6 a.m. This was two days before her expected due date of Jan. 6. She works in the progressive care unit at the hospital.

“I got out at 7:30 a.m.,” said Lauren, back at home Sunday evening. “I just continued working, came home and I was not comfortable, so I called Kylee and said I think it is time to go to the hospital.”

She could have checked herself into the hospital earlier in the day, but did not want to go too early.

“A couple of days before that she said she was having contractions,” said Kylee, who in the woods working.  “But, I hurried home.”

“I did not expect it,” said Lauren, when asked what she thinks of having the New Year’s baby. “It’s exciting.”

“They are both healthy,” added Kylee. Lainley weighed 7 pounds, 13.4 ounces and measured 22 inches.

Kylee added that Lainley enjoys moving now and before birth.

“She was running in there — weren’t ya?” said Kylee, speaking to his snoozing daughter, who was making the cutest baby noises.

The couple has received many fine gifts from community-minded merchants across the county including a new pack of diapers, certificates for various gifts and a free one-year subscription to the Presque Isle County Advance. And after one year, a follow-up story and photo.

Lainley’s grandparents are, Frank and Lori Romel of Posen; Shane and Amanda Chojnacki of Posen; Harry Jr. and Annette Davis of Posen; and Brian Szczerowski of Alpena.

Her great-grandparents are Elizabeth Schuch of Posen; Harry Sr. and Mary Davis of Hillman; Ron and Jean Skiera of Lachine; and Arleen Chojnacki of Lachine.