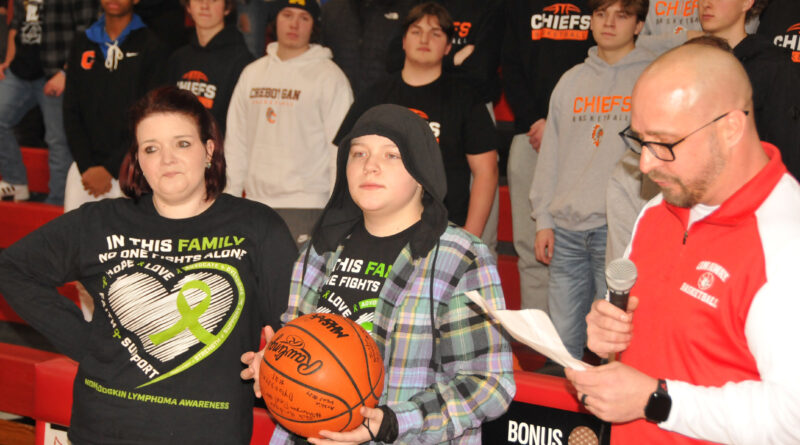 Everything was in place for what was going to be a hard-fought battle on the hardwood between M-68 rivals, Inland Lakes and Onaway in boys’ hoops.

The Onaway gym was packed to near capacity, as it always is when these two schools line up against each other, making it the perfect occasion to honor eighth-grader Braxton Porter’s even tougher battle against cancer.

Onaway boys’ varsity coach Eddy Szymoniak called Braxton from the stands and named the young man the Cardinals’ honorary captain for the evening.

Everyone stood and applauded Braxton as he walked across the basketball court with his mother Stacey alongside.

“We did not tell him what was happening tonight,” said Stacey. “He just knew he had to be here.”

“I followed his journey and wanted to honor his courage and positive attitude through it all,” said Szymoniak. “We all need a reminder of the fight kids like Braxton go through and do what we can to help them and keep them positive. I wanted Braxton to feel the love and how much support there was behind him.”

DURING THE ceremony in front of the scorers’ table, Stacey and Braxton handled the moment well. If there were any nerves, and there were, they were not showing it. Braxton was flipping a basketball in the air as Szymoniak spoke to the crowd.

However, moments later in the hallway, both broke down talking about the ordeal.

“It was a rough few months,” Stacey explained, after recomposing herself. “The chemo was very strong and he is just getting to where he is not as tired. His back still hurts.”

When Braxton was asked why he was getting emotional, he replied, “I don’t know,” with a tinge of emotion in the words.

WHEN IT started, “My back was hurting and it was getting hard for me to stand up and all that,” said Braxton.

“It started in May and June (2022),” Stacey explained. “he kept getting this pain almost like a pulled muscle. We kept icing it and giving him Tylenol, and then it got to the point where as soon as the six hours was up, he needed more medicine.

“He would wake me up four, five six times in the middle of night just sobbing. It really hurt.”

Doctors could not ascertain what was wrong at first, until the day when Braxton fell and could not get back up. This was Aug.1, 2022. That night Braxton was transferred to the University of Michigan (U of M) Hospital because he had a mass on his spine as large as a grapefruit.

The next day, he underwent surgery to remove part of the aggressively growing tumor so he could be able to continue using his legs.

Eventually, Braxton was diagnosed with non-Hodgkin’s lymphoma. He had to go through many tests and procedures to know exactly where the cancer was located. He had a port placed in his chest to administer his future chemotherapy treatments.

On Aug. 14, 2022, Braxton began his first round of potent cocktail of chemotherapy treatments. The treatment lasted seven days with two treatments directly into his spine. After the first round, he started losing his hair and feeling the side effects. His first stay in the hospital was for three weeks, before having to return for another week’s worth of chemotherapy.

Braxton went back to U of M for treatments every two weeks until Nov. 1, 2022  for his final dose.

It was Nov. 28, 2022 Braxton underwent a multitude of testing from morning until night to see if the treatments had worked. Two days later, he was declared cancer free.

Braxton will return Feb. 5 to have his port removed and will travel to U of M every three months for a year or so to make sure he remains cancer free.

“Through all of the pain, and the sickness from the chemo, Braxton has kept his sense of humor and has shown the strength of a superhero,” said coach Eddy during his speech last Thursday. “He would challenge all the nurses and doctors to card games. He would make the nurses laugh as he told his dad jokes and his ‘your momma’ jokes.

“He was so strong through this experience and always had a smile on his face. Through every procedure or operation, he would tell the doctors, ‘do what you need to do.’ ”

BRAXTON IS hopeful to return to school in person for his freshman year of high school.

A mother’s worry for her child never goes into remission.

And how does it feel to be normal again, “it’s real nice,” Braxton said, with a returning confidence that should carry him through the next, upcoming chapters.

All were from the team, cheer squad and Onaway Custom Embroidery.