Paul D. Darga Jr., 59, of Posen passed away peacefully Wednesday, February 13, 2019 surrounded by family. He was born February 15, 1959 to the late Paul Darga Sr. and Barbara Ann (LaPointe) Darga of Posen. He was known to many as Paul; though throughout the years and likes of his family and relatives he gained the names of David, J.R., Jr. Uncle, Dzia Dzia and Pops! 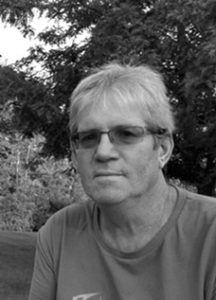 He is survived by his loving wife, Carleen (Konieczny) Darga; a son Jacob and a grandson, Hunter of Muskegon; a son, Justin of Grant; and a daughter, Jene’ and Michael Urban and granddaughter, Ella of Clarkston; siblings, Terry and Jill (Cornett) Darga of Grand Blanc, Kimberly (Darga) and Donald Roznowski of Posen, Sheila Darga of Brighton, Matthew Darga of Harrison Township and Lori (Darga) Selke and Joel Darga both of Brighton. He is greatly loved by countless nephews, nieces, numerous cousins, loving aunts, uncles, caring neighbors and close friends.

From a young age he loved the outdoors exploring the woods of Presque Isle County, small game hunting and fishing.  His love for the family “DA 4D Camp” and the 40 acres of woods that he knew every inch of brought great experiences of rabbit hunting with his many beagles all named “Ginger” and mushroom picking where he declared not to share his lucky spots.  He was a great teacher of fishing and loved to share his experiences of angling with his sons and nephews and taught his younger siblings a thing or two as well. He was an avid reader and loved a good novel and could be found reading in his backyard taking in the sights of his pond and golf pin 150 yards out. A round of golf was annually enjoyed every season. He was a sports’ fanatic, whether watching his children participate in high school or college or enjoying a close competitive college game with friends and family or a Super Bowl with Tom Brady at the helm. He excelled in sports at Posen High School and loved his years as a football quarterback and basketball starter. He played in a softball league after high school for a local Presque Isle team as well.

His passion for cooking took off years ago with his wife’s support. He explored new recipes from hors d’oeuvres to full meals and desserts and he mastered many.  He had a creative side and was known to prepare and showcase his desserts and specialties at family get-togethers and the occasional Fourth of July gathering.

He enjoyed the art of canning and has shared his salsa recipe with only a select few! He loved music and often could be found listening to Pink Floyd and Tina Turner or taking in a great music video from the good ole days.

He was a well-defined welder, a millwright by trade and worked in construction traveling throughout the United States. He journeyed to the state of Washington after the eruption of Mount St. Helens in the 1980s to the Florida coast and several states in between throughout his work history.

He loved the water and the Great Lakes and had several work experiences with his late father Paul Sr., working on local rivers, marinas and sleeping on an old tug in the nearby harbor. He was mastering his craft for welding in 1990 stationed on a barge on Lake Huron and his love for swimming saved his life when a swift and powerful wave

presented its fiery sinking the tug that housed him and co-workers that frightening day; a tragic experience, though he survived and kept his faith in God strong. In later years welding and other millwright trades kept him working locally in northern Michigan, a place he appreciated and loved more than his travels.

Paul’s wittiness and an occasional one-liner may have taken you off guard, though a great memory for all who encountered them. His unconditional love for his wife, children, grandchildren and extended family was endearing and will be deeply missed.

A Celebration of life will take place this summer with family, close friends and neighbors. Cremation arrangements have been made by L. J. Griffin Funeral Home in Brighton.