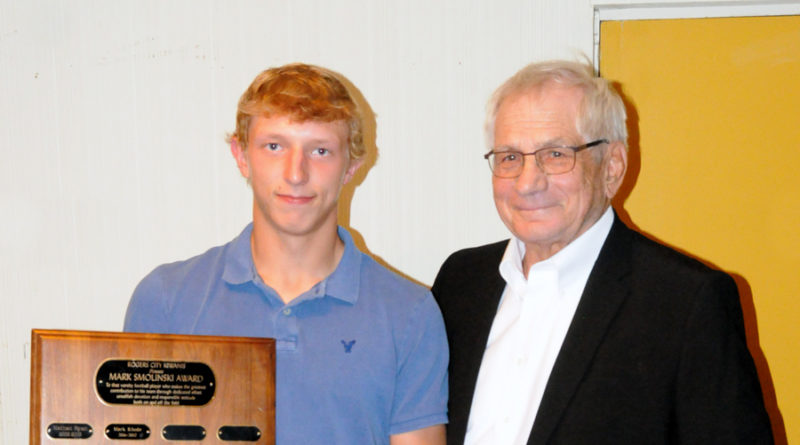 A different venue and a world champion athlete highlighted the annual awards night hosted by the Hurons’ Sports Boosters Association last week. For the first time ever the event was staged at the Rogers City Theater and Super Bowl III champion Mark Smolinski graced the theater by presenting the award named in his honor.

Rachel Romel-Galer, in her second term as boosters president, welcomed Smolinski to the podium.

“Mark Smolinski began his career as a fullback and linebacker on his high school team and ended it as a Super Bowl champion with Joe Namath and the New York Jets. He is a 1957 graduate of Rogers City High School and became the first all-state football player when he made the 1956 Class B all-state team,” Galer said.

All-state linebacker Kaleb Budnick earned the Mark Smolinski Award, the first time he actually presented the award to the winner. After presenting the award, Smolinski offered a few comments.

“When I think back of what makes a good athlete. I don’t think is it your legs or arms. That is just a means of running faster or throwing a ball little harder. Really what makes the athlete is the heart. A heart is the champion. I don’t care how good you think you are, if you have the heart, there is a place for you,” Smolinski.

Athletic director Samantha Amrhein handed out both awards. Fleming who earned most valuable and all-state honors for both basketball and volleyball. Budnick was all-state in football and excelled in basketball and baseball.

Awards were given most valuable and most improved awards for each sport.

Most valuable (V) and most improved (I) winners for their respective sports were: wrestling Isaac Hein (V) and Dylan Daugherty (I); cross country, Morgan Baller and Matthew Wilbert (V), Isabella Rebolho and Justin Kroupa (I); track and field, Luke Augsburger and Catherine Belusar (V) and Christina Andrews, and Anthony Paul (I); football, Ethan Hincka (V) and Lewis Fleming (I); volleyball Taylor Fleming (V) and Catheryn Hart (I); boys’ basketball Ethan Hincka (V) and Lewis Fleming (I); girls’ basketball, Taylor Fleming (V) and Grace Garrison (I); bowling, Luke Augsburger and Chasta Ganske (V) and Chandra Ganske and Isabella Rebolho (I), golf, Nick Freel (V) and Brady Meyers (I). There was no most improved medal awarded for boys’ bowling. Baseball and softball awards will be announc

ed after the conclusion of the season.

Amanda Wirgau won the Judy Paradise Award for the senior female athlete earning three letters and a minimum grade point average of 2.5 and community member Diane Schultz won the John Geyer Award for her contributions to Hurons’ sports over her lifetime.

The scholar athletes of the year, earning the James Quinn Award, were Daniel Bielas and Chasta Ganske. 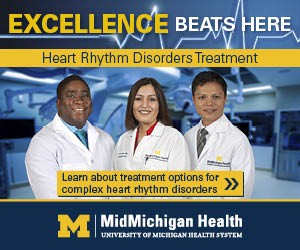