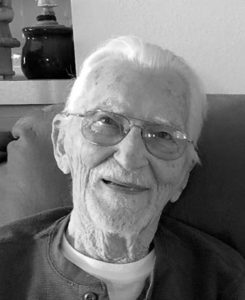 One month after his 19th birthday, Jim was inducted into the U.S. Army serving in Company B, 157th Infantry Regiment.  A World War II veteran, from August of 1943 until January of 1946, Jim honorably served in Italy, Southern France, Rhineland, Ardennes and Central Europe. Following his honorable discharge, Jim returned to Ohio and July 26, 1947 married Vida Marie Wetzel in Akron.

They made their home in Kent where Jim worked in the family business, Richards Flower and Gift Shop. Jim eventually co-owned and managed, with his brother, the flower shop until his retirement in 1979. A well-respected businessman and community leader, Jim was active in the Kent Chamber of Commerce, the Jaycees, Rotary International and Rockton Masonic Lodge.

With a great love for the water and boating, Jim and Vida left Kent and moved to Mulllett Lake in Indian River to enjoy their retirement.

They loved living on the lake and enjoyed summer days cruising in their 23-foot Lyman, Marida. They loved visits from family and enjoyed traveling.  Jim never lost his love for flowers spending much time working in his flower gardens. Together, Jim and Vida were volunteers for Hospice of the Straits in Cheboygan and were active in fundraising for the construction of the Cheboygan Hospice House.  Eventually, Jim and Vida moved to Onaway in 2005 to be closer to family.

Blessed with 62 years of marriage to a loving wife and a beautiful family, Jim was a humble man.

He loved his family, adored his grandchildren, and enjoyed spending time with them. He had great integrity and kindness, often helping others without them knowing. Grateful for 94 years of a healthy body and mind, Jim was extremely independent and sharp as a tack. He had a wonderful sense of humor, a great attitude, and with 94 years of life experience, a tremendous amount of wisdom.  He was friendly, likeable, and easy to talk to. This honest gentleman, who was genuine and truly cared about others, will be sadly missed and fondly remembered.

Visitation was at the Chagnon Funeral Home Wednesday, June 5, from 10 a.m. until the time of the funeral service.  The Rev. David Tuggle officiated.

A graveside service and military honors followed at Hillcrest Cemetery.

Jim’s family has suggested memorial donations to Hospice of the Straits or Cheboygan Hospice House.