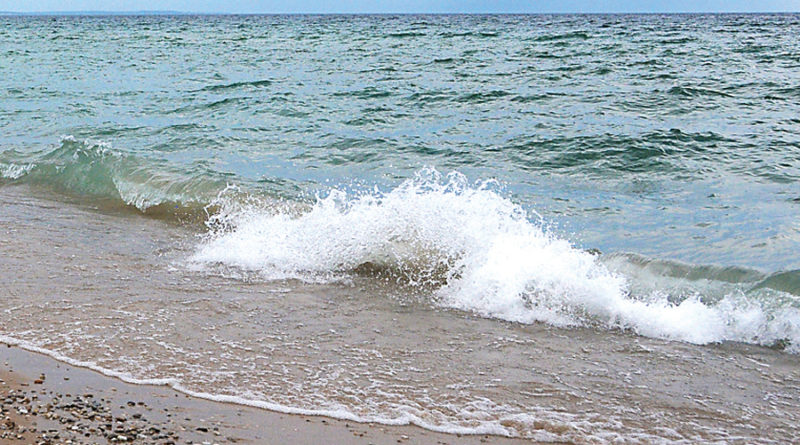 by Mary Ann Heidemann–Staff Writer
Bicyclists on the Huron Sunrise Trail near Rogers City’s sewage treatment plant must now come to an abrupt halt at a set of barricades recently erected in Waterworks Park.  The barricades block off a 300-foot segment of the trail where wind and waves have thrown sand and rocks across the asphalt surface, making it dangerous or impassable.
Last year, city crews placed rip-rap on the lake side of this same segment, hoping to protect the trail from erosion damage. This year, the riprap is simply gone; carried off by a rapidly rising lake. 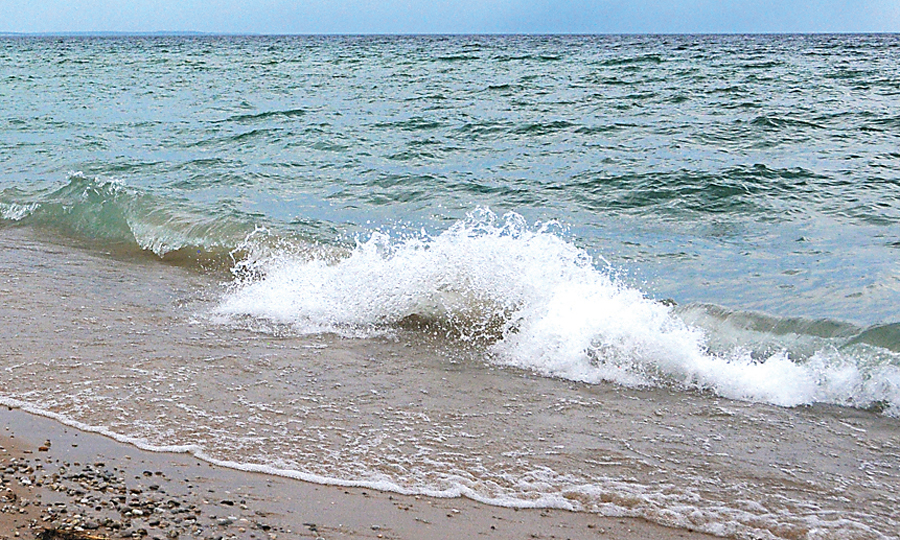 “One option would be just adding more riprap,” said city manager Joe Hefele, “but we’ve decided against doing that. Just piling up more rocks wouldn’t really solve the problem, and it would further limit trail user’s access to the beachfront and the water. Instead, we plan to move the trail further inland. Fortunately, we have plenty of room in the park to do that.”
Hefele plans to accomplish the trail relocation using city staff, and may be able to get the work underway yet this fall.  Other areas of erosion concern are more difficult and potentially expensive to address. Jack Smitka Park, located on the northwest point of the harbor breakwall, along the Sunrise Trail harbor spur, is also being eroded, primarily due to its exposure to the increasingly prevalent northwest winds and waves.  If this area continues to be threatened, Hefele plans to seek professional engineering advice before taking protective action.
Erosion caused by high lake levels is nowhere more apparent than at Seagull Point Park in Rogers City.  Lately, it’s not just the sunset views that draw visitors, but views of the point itself; or what’s left of it.
Just two years ago, the point was a wonderful spot to set up a folding chair and watch the swirling wave patterns created by the peninsula’s contours. Today the point is totally submerged, with just the tops of a few shrubs still visible above the waves. In addition, waves have undermined several of the large boulders separating the parking area from the beach, causing the boulders to tumble down toward the water.
Next Monday, Hefele will be holding a strategic planning meeting with his engineering staff and city council members to discuss next steps to address the rising water.  But the city is firm about protecting the trail.
“We don’t want to discourage new trail users,” says Hefele. “The trail is very important to the city, and extremely popular with residents and visitors, too.”
Meanwhile, beyond city limits, the Michigan Department of Transportation (MDOT) is taking emergency actions to stabilize portions of the Huron Sunrise Trail lying between Shore Road and P. H. Hoeft State Park.  Just southeast of the MDOT beach wayside park, the trail runs along a narrow strip of highway right-of-way lying between U. S. -23 and Lake Huron.  The close proximity to wave action has caused erosion along this trail segment in the past.
To address erosion, stone riprap was previously put in place at several threatened trail locations within MDOT right-of-way. However, according to Eric Precord, MDOT Transportation Maintenance Coordinator, the size of the stone used previously was 4 to 6 inches in diameter, and was simply no match for the strength of Lake Huron.
“Our plan now is to place sheet piling along approximately 700 feet of trail, then place stone, ranging from 16 inches to 3 feet in diameter, between the sheet piling and Lake Huron. With this project, it’s not just the trail we are protecting; it’s the roadway itself.”
Precord emphasized that MDOT cannot go forward with the work until all required permits are issued, including environmental permits from the U.S. Army Corps of Engineers and Michigan’s Department of Environment, Great Lakes and Energy. However, MDOT has used an expedited permit process, and expects to have the necessary permits in hand by Labor Day, with construction to be completed before the snow flies.
Although the larger stone and sheet piling will prevent direct beach access within the protected segment, the public will still be able t access the popular MDOT beach on either side of the project area, and trail users will continue to make their way safely along the waterfront.