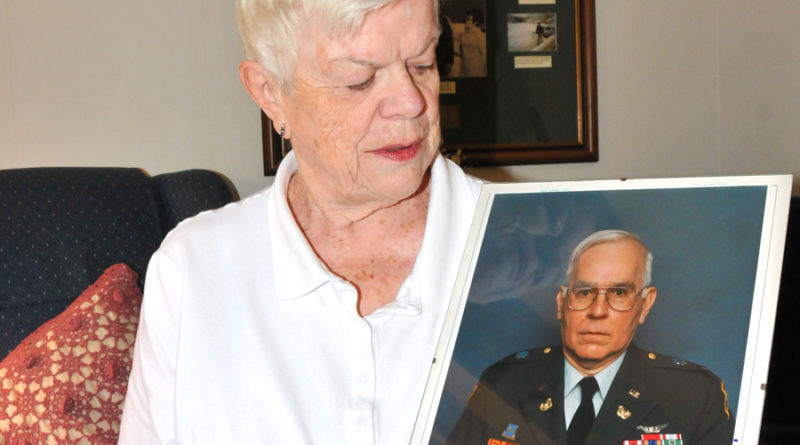 by Peter Jakey–Managing Editor
Arlington National Cemetery will be getting another hero, Sept. 17 at 11 a.m.
It will be the day Duane Lewis Haneckow, 78, of Belknap Township will join more than 420,000 men and women and two presidents.
Ted Beck, owner of the Beck Funeral Home, will be taking Haneckow on the 13 1/2 hour drive to the country’s famous cemetery. Duane’s widow, Eileen, and their children, Suzanne Haneckow Bailey of Maro Island, Florida and Duane Haneckow Jr. of Woodbridge, Virginia, will be there.

Eileen said her son passes by the cemetery every day on his way to work. Suzanne will be accompanying her mother.
“I think it is the greatest honor anyone can have bestowed. I really do,” said Eileen. “I had no problem with it when we discussed it before he became very ill. He asked if it would be all right if we both went there and I had no problem with it. I said, ‘why not.’ I had been traveling with you all this time. Let’s do it at the end, too.”
Eileen, who just purchased a home in Rogers City this summer, will join her husband some day.
“His big military quote was, ‘always on watch.’ That’s going to be on his headstone,” said Eileen. “He worked himself up all through the enlisted ranks to E7 and then he became a commissioned warrant officer. When he passed, he was a CW5. That’s the highest of the warrant officers that you can be.
“You have your enlisted grade, then you have your majors, colonels and generals. My husband was an advisor and he advised many generals. He was military intelligence.”
Duane retired, March 16, 2001, following 42-plus active-duty years in the military.
“We meet at the chapel and then we proceed,” said Eileen. “His body will go on a caisson and there will be six honor guards. We will then proceed to his grave. There will be a band, someone to play taps and there will be a 21-gun salute, as well as the folding of the flag from his casket to me.”
For Duane, who was born and raised in Rogers City, it was a distinguished career. He graduated with the Rogers City High School Class of 1958. Some of his classmates were on the Carl D. Bradley. His U.S. Army career began months later in February 1959 at the age of 18 with basic training at Fort Leonard Wood, Missouri and advanced individual training at the radio direction finding course at Fort Devens, Massachusetts.
“He got to Fort Devens on a Thursday and I met him on a Saturday,” said Eileen. Like many couples of the era, they met at a dance. She grew up in a small town, 26 miles outside of Boston.
“Fort Devens was 12 miles from my home,” said Eileen, who still has the strong New England accent.
“I saw him from across the room and he saw me from across the room – and the light went on for both of us.” She still remembers the date that the two met. It was April 20, 1959.
“I was two days short of knowing him 60 years,” said Eileen. Duane passed away, April 18, 2019.
“We went dancing every single Saturday night that we dated,” she continued.
His first assignment was with the 177th Army Security Agency Company in Seoul, South Korea near the demilitarized zone. “He was just turning 19 when he went over,” Eileen said.
The Army Security Agency folded and became Military Intelligence. “That was his whole 42 ½ years,” said Eileen. “He could never, ever bring his job home. Even when he retired, he never once talked about what he did because he signed an oath that he would never do that.”
In March 1961, while assigned at Two Rock Ranch Station, California, SP4 Haneckow received orders for the 3rd radio research unit in Saigon, Vietnam where he held a DF supervisor position.
“Duane was in Vietnam before anybody was in the country. That was the beginning of 1962,” said Eileen.
He returned to Fort Devens in July 1962 and performed instructor duty at the Army Security Agency Center and School. In September 1963, SP5 Haneckow went to Germany for the first of three tours. On the final stop, he accepted the challenge of planning and executing the closure of the field station’s Teufelsberg Operations complex in Berlin, that ceased operations in August 1992. From there, he went to U.S. Army Intelligence and Security Command at Fort Belvoir, Virginia, to serve as a staff action officer.
Haneckow’s major awards and decorations included Legion of Merit; Defense Meritorious Service Medal; Meritorious Service Medal, Air Medal, Army Commendation, Joint Service Achievement Medal and the Air Crewmember Badge. He also earned a Bachelor of Arts degree from the University of the State of New York.
In retirement, Haneckow was an avid reader, who enjoyed jogging and walking.
“He was not just my husband, he was my very best friend,” said Eileen.
“We did everything together. I told him I would take care of him until his dying day, and I did.”