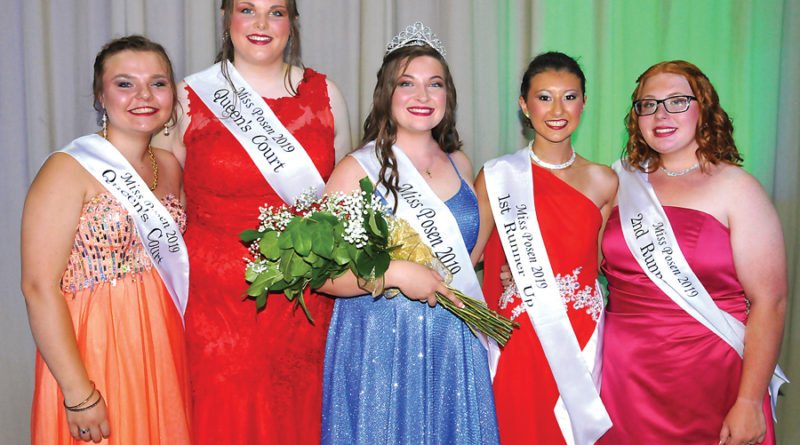 by Peter Jakey–Managing Editor
Posen’s new queen Brooke Rocco was still clearing tears from under her eyes long after master of ceremonies Randy Idalski put an end to the suspense at the 53rd annual Miss Posen pageant.
“Faith Romel will now present the 2019 Miss Posen award to contestant No. 3, Brooke Rocco,” Idalski said at the podium. Rocco was in complete shock when her name was read.
Romel placed the crown on her head as the Kelly Clarkson song, “Moment Like This,” played. She waved to the crowd as tears of joy continued to well up. Rocco will represent the community during the upcoming 68th annual Posen Potato Festival and throughout the coming year..

“I’m very excited to represent Posen, for sure,” said Rocco, who is the first sophomore in the long history of the pageant to win. With no seniors in the running, the pageant committee had to open up the competition to underclassmen. Rocco also won the coordination and fitness award.
Hailey Nicole Styma was first runner-up and winner of the talent award for her tap dance to a mix of Frank Sinatra’s “New York, New York.” Styma will wear the crown if Rocco is not able to carry out her duties for the entire year.
Alexis May was the second runner-up and co-winner of the poise and appearance with Paige Marie Thompson, who took the honor of Miss Congeniality. Last year’s winners of each award were on hand to present the awards.
Before Idalski started announcing award winners, Romel said her final farewell. Her speech was on the back of the program, but she delivered it from memory, providing many thanks yous, especially to family members, the rest of the 2018 court, along with the pageant committee and members of the Posen Chamber of Commerce.
“This was an amazing year, and I would not have traded this opportunity for the world,” said Romel. “To the next queen and court; congratulations on completing the task of a stressful, fun two weeks. I know you will do amazing and you are all beautiful.” Romel received a $500 scholarship from the pageant committee and a framed portrait taken by  Presque Isle Newspapers, Inc. publisher Richard Lamb, Rocco will receive her scholarship after completing the one-year reign.
In kicking off the festivities, Idalski told the audience that the group of five worked extremely hard the last two weeks. “Let’s meet our northern stars,” he said. That was the cue to open the curtain and have each contestant introduce themselves and their parents.
The opening dance number was then performed twice so judges Sandy Dion of Grand Lake, Lisa Schultz of Alpena and Dr. Steven Kandow of Fort Wayne, Indiana could get a look.
The contestants were judged on personality, highest possible points 45; coordination/fitness, 15; talent presentation, 25; and poise and appearance, 25.
Before the talent presentation, Anissa Eagling, Miss Michigan Agriculture and last year’s talent winner was one of three entertainers. She did a dance number called, “Evolution of Dance.” After the five performed their talent presentations, MiaKaela Bannon, Miss West Michigan Outstanding Teen, danced to the theme song of the movie “Pirates of the Caribbean: Curse of the Black Purol.”
Later, before winners were announced, Jacob Bruski of Rogers City, who is attending Interlochen for the Arts, took over the runaway for the second year in a row with a guitar solo.
Posen High School girls’ basketball coach Karl Momrik won the $117 from the 50/50 drawing.
“He just donated $50 back to the pageant,” said Idalski. “Thank you, Karl.”