Shirley M. Hilla, 92, of Rogers City, died at Medilodge of Rogers City Wednesday, September 11, 2019. Born and raised in Alpena, Shirley was the daughter of Charles and Mabel (Pake) Rosbeck. After graduating from Alpena High School in 1945, Shirley furthered her education by training to become a licensed practical nurse. 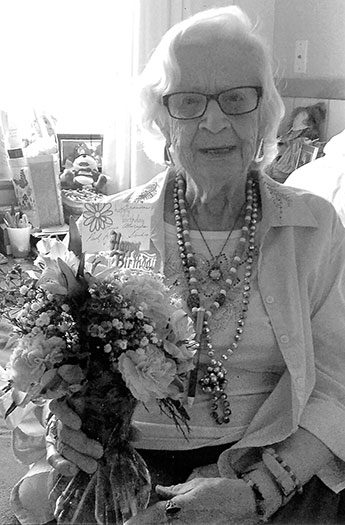 It was while working as a nurse that she cared for a young man, Mr. Edward Hilla of Rogers City, who would later become her husband.  They were married June 25, 1949 in Alpena and made their home in Rogers City.

Working as a nurse for 30 years, both in the hospital and for many of the local physicians, Shirley was caring, compassionate, and well-known in the community.  She was a longtime member of the Rogers City Servicemen’s Club and an officer of the Ladies Auxiliary, belonged to St. Luke Episcopal Church, and volunteered for Hospice of the Sunrise Shore. Shirley loved going to garage sales and collected porcelain dolls and teddy bears. With her great sense of fashion, she was always very stylish, color-coordinated and well-accessorized. A bit of a “spit-fire,” Shirley loved to have fun and was known to give her friends, family, and patrons at the club a “hard time,” but in a good and amusing way.  She enjoyed socializing and seemed to know everyone in town. Like a ray of sunshine on a dark day, Shirley maintained her positive attitude and continued to bring smiles to those around her right until her final days. This remarkable lady who had such a zest for life will be sadly missed and remembered with great love and fondness.

ulianne Kobjolke; great-grandchildren, Hailey Hilla, Courtney Lemley, and the twins, Sandro and Sienna Glomski; as well as her sister-in-law, Patricia Diamond of Traverse City. A dog-lover, who looked forward to visits from her furry family, Shirley also leaves her granddogs, Sunny, Winston, Cooper and Tinker Bell.

Shirley’s family received friends at St. Luke Episcopal Church, 120 N. First St. in Rogers City Monday, September 16, until the time of the memorial service beginning with the Rev. Bruce Michaud officiating. Shirley’s final resting place is at Mount Calvary Cemetery in Rogers City. Those planning an expression of sympathy please consider a donation in memory of Shirley to St. Luke Episcopal Church, MidMichigan Hospice of Alpena or Medilodge of Rogers City.  Funeral arrangements were in care of Chagnon Funeral Home.