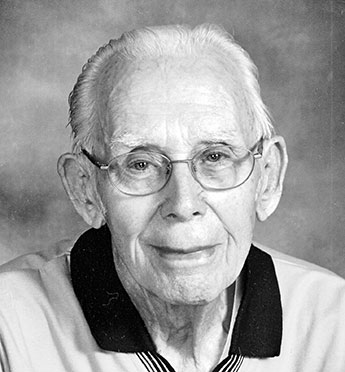 He was born the son of Lloyd E. Sr. and Meta (Dumsch) Conley March 8, 1924, in Rogers City. Lloyd served in the U.S. Army Air Corps during the World War II era. He studied music and education at Central Michigan University and completed his master’s degree at Michigan State University. Lloyd married the former Helen Holzschu in 1951 and she preceded him in death February 4, 2003.  He had an illustrious career as a high school band instructor with Harbor Springs, Greenville and Clare public schools. He had composed and published several music scores for high school ma

rching bands. His published works number approximately 350.  Lloyd had entered and won a contest for the Kansas State Sesquicentennial celebration for his composition and direction of his piece titled “Kansa Suite.”

Lloyd is survived by his sons, Thomas Conley of Ocklawaha, Florida and David (Linda) Conley of Farwell; his daughter-in-law, Sue Conley of Hampton Rhodes, Virginia; his grandchildren, Clayton, Chris and Rachel Conley; a sister, Lois Furtaw of Rogers City; and a brother, James Conley of Battle Creek.  He was preceded in death by his wife, Helen; and his son, Patrick.

In keeping with Lloyd’s wishes, cremation will take place and his final resting place will be in the Mount Calvary Cemetery in Rogers City.  A memorial will take place at a later date.  Arrangements were made with the Stephenson-Wyman Funeral Homes, Clare and Farwell.  Online condolences may be addressed through www.stephenson-wyman.com.