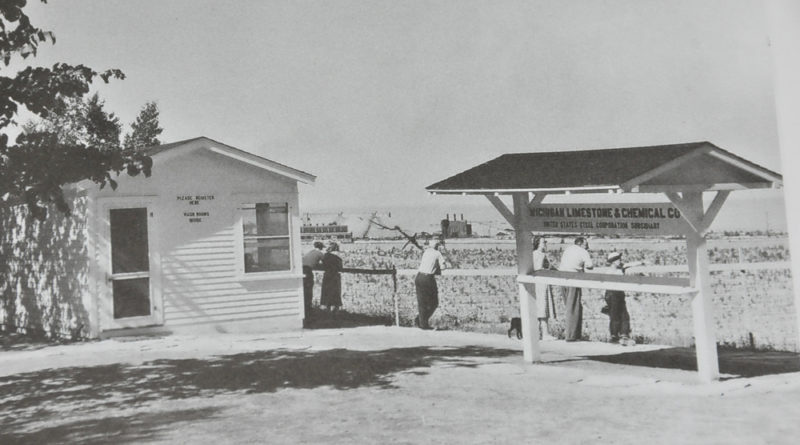 With a new decade just getting started there is a change coming at Carmeuse Lime & Stone as the company has decided to mine the high-quality limestone underneath quarry view and relocate the popular tourist destination before 2024.

Work already has started with a tree contractor clearing the land north of quarry view and Turner Mining Group will follow right behind to strip and remove the overburden, according to Calcite site operations manager William de Changy. The mining will take place in this area because it is not very far from the primary crusher.

“That’s just the first step,” said de Changy. “We will do the test holes to drill to see the chemistry. Our goal is to extract the stone from this area in the future.”

Plans are to mine starting from the northern most point and continuing south.

“When we get to quarry view, then it would be time to relocate it somewhere else,” said de Changy. The new location has yet to be determined.

“And maybe we will open a new location before and keep the two locations open,” said de Changy. “When it is time to close this one, the other one could already be opened, but we don’t know yet the position of the new one.”

It will be the third time quarry view moved.

“The original location of quarry view, and that’s not the name that was used, it was Lookout Point,” said Mark Thompson, local historian and Presque Isle County Historical Museum curator/executive director. “The original location was closer to Petersville and it had a building that housed restroom facilities and interpretative materials about the plant. It was operated by the Rogers City Chamber of Commerce.

Michigan Limestone Operations (MLO) responded to the growing interest in the quarry by developing a viewing area in 1949. Referred to as Lookout Point, the fenced area was located at the highest point of the quarry’s south bank, about 140 feet above the quarry floor.

Visitors could see the plant, quarry and harbor, “along with a dramatic close-up view of one of the massive electric shovels that was operating nearby,” states “Calcite & the Bradley Boats,” by Thompson and Gerald Micketti.

As a result of the popularity during 1949, MLO added a visitors’ center prior to the 1950 tourist season and turned over to the local chamber and opened, July 1, 1950.

“It was always staffed, usually by a college student, who was usually the son of someone working at Calcite,” said Thompson. “It was mainly college students, but it could have been others.”

By mid-September, 15,882 individuals had signed the register in the visitors’ center. It was estimated that well over 4,000 other people visited, but did not sign the register.

In 1951, local people began referring to the site as quarry view, and in 1951 that was adopted as the official name for the overlook and visitors’ center.

Attendance jumped to 37,742 in 1951, partially as the result of billboard advertisements placed along U.S.-23 by the chamber. One sign touted the quarry as “The Eighth Wonder of the World.” Another innovation added by the chamber in 1951 was tagged limestone samples that were passed out to tourists as souvenirs of their visit.

Prior to the 1952 tourist season, it was moved for the same reason the current location is being moved.

“They wanted to mine right in that area where Lookout Point was located,” said Thompson. “They abandoned that very nice building and moved closer to Gilpin Memorial Field. The driveway would have been from the southeast corner of Gilpin Memorial  Field. That’s where you drove in. They had a smaller building that was built on skids so it could be moved

That location had to be moved because of mining operations, although it is unclear how long it has been at the current location.

de Changy said future plans include mining to the west of the U.S.-23 business route.

“We need to pump the water out,” he said. Additionally, power lines will need to be relocated.

(Historical information was obtained from “Calcite & the Bradley Boats.”)