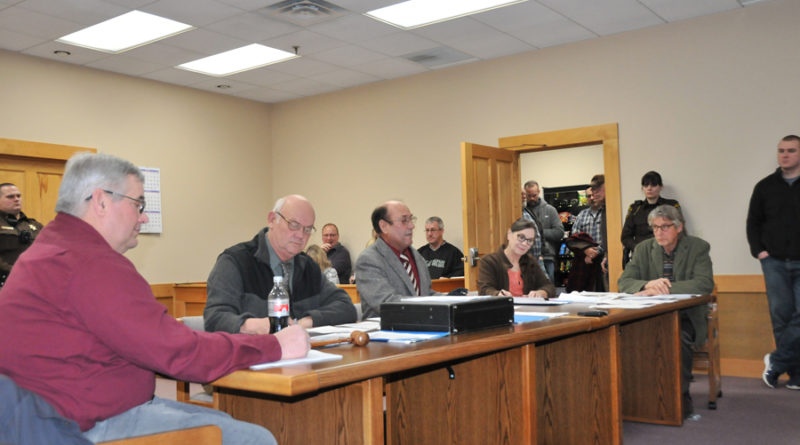 It was standing room only at the county courthouse last Thursday, as the public and county commissioners discussed the merits of a resolution to declare Presque Isle County a “Second Amendment Sanctuary County.” The resolution was ultimately adopted on a three-two vote, but not until debate brought out a spectrum of positive and negative aspects of the motion.

The crowd was respectful throughout, due in part to board chair Lee Gapczynski’s leadership. At the meeting’s outset, when the agenda provides time for citizen appearances, Gapczynski announced: “I will allow 10 public statements of up to three minutes each.” Good behavior was also encouraged by the 89th District courtroom setting (where the meeting was moved to provide more space) and by the presence of the Presque Isle County Sheriff, Joe Brewbaker, along with several of his deputies.

Eight citizens spoke about the proposed resolution, six in support, one providing further documentation on shooting incidents and one opposed. Joe Klein, a resident of Cheboygan County who successfully pushed for a similar resolution in his home county, said: “I’m here to stand against any and all red flag laws.” To date, 17 states have adopted some form of gun control legislation that allows the courts, on petition from police or family members, to remove weapons from a citizen who is shown to be a danger to himself or the public. Opponents term these “red flag laws.” After a new spate of mass shooting incidents, several more states are considering legislative response, including Michigan, where Gov. Gretchen Whitmer recently announced her support for such legislation, igniting opposition in the form of county-level Second Amendment sanctuary proposals.

“We have to send a message to Lansing,” said Mike Leow of Rogers City. “They are in a totally different world than we are in northern Michigan.” Leow’s concern was red flag laws, “because there’s no due process. Someone out of the blue can file a red flag on you and you’re going to spend some money to get your firearms back.”

Roger Marsh, owner of Onaway Outfitters, presented an economic side of the issue. “Twenty-five percent of my business is in firearms. If some of the gun laws that are proposed are passed, I’ve got two options.  I either have to lock my doors forever, because no business can stand to lose 25 percent, or I increase the price of my products 25 percent and pass that along to my customers, in which case, like option A, I’ll eventually have to lock my doors.”

Although former county commissioner Wayne Vermilya, came to the meeting to talk about recycling, he contributed to the Second Amendment discussion by bringing an article about the 20 children and seven adults murdered at the Sandy Hook Elementary School shooting, an event that some gun rights advocates have denied or disputed. “We have to speak the truth and we have to do that on the basis of fact,” said Vermilya. “To deny that happened is completely unacceptable for a public official.”

Rogers City resident Rachael Goodstein addressed the legality of the resolution, saying, “I’m pretty sure it’s not the county commissioners’ job to assert what’s constitutional; nor is it the sheriff’s department. That is for the court system.” Questioning why the Second Amendment should be picked out for a special resolution, Goodstein said: “I like all the amendments, and all the amendments we have are subject to regulation.”

The motion to approve the Second Amendment Sanctuary Resolution was made by commissioner Nancy Shutes and seconded by Mike Darga, who also read the entire resolution aloud. In discussion on the motion, commissioner John Chappa voiced concerns about its legality, noting that Marquette County’s civil counsel found a similar resolution proposed there exceeded the county board’s authority because it appeared to direct the activities of the sheriff and prosecutor. Instead, Chappa offered a copy of Marquette County’s resolution, affirming that board’s support for all constitutional rights and all constitutional amendments.

Commissioner Carl Altman expressed concern over the word “sanctuary,” because “it implies that we are OK with any weapons.” Altman made reference to the 1979 shooting of sheriff Duane Badder, who was killed by an unemployed recluse with a history of firing gunshots in his neighborhood. “Should that person have had a weapon?” Altman asked. “I’m playing devil’s advocate here. I don’t want a target on my back…. I like my guns and I have quite a few,” he added. But what the governor was proposing would apply to someone with mental problems, according to Altman.

When the question was called, the vote split, with Shutes, Darga and Gapczynski in the affirmative, and Altman joining Chappa in voting no. Considering the large number of citizens attending, the spirit of the discussion and the many contested issues raised, the respectful demeanor of the public and the commissioners alike was remarkable and offered a ray of hope for our democracy.  Emphasizing the significance of the discussion, Brewbaker announced that active-shooter training would be offered at the Rogers City High School Feb. 17; a type of training no one would have thought necessary just a few short years ago.