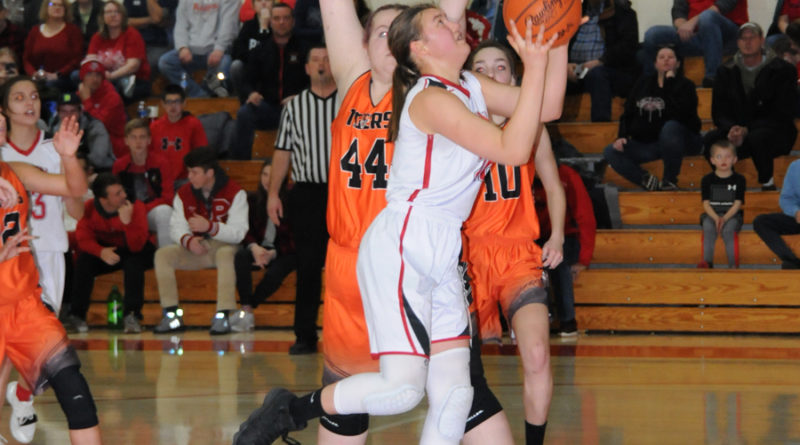 A foreign exchange student has made an immediate impact in Posen, on and off the floor.

Elena Kalbitzer, who came from Berlin, Germany, a city of 3.5 million people, decided to expand her horizons and take part in the exchange program. She went from the largest city in Germany to one of the smallest public schools in Michigan.

“Living in a big city, there are people you see every day but you don’t know them,” said Elena Kalbitzer. “Over here, everyone knows everyone. It’s like a community, and I like that. I really, really like it. I’m going to miss it when I get back.” Her parents are Thomas and Isabelle Kalbitzer, while her host parents are Daryl and Carrie Paull, who have shared their home with several exchange students in recent years.

“She has great knowledge of the game, the way she could shoot, her quickness,” said Momrik. “We suspected she would be something special, but I don’t know that we thought it would hit this level.”

Elena Kalbitzer is leading the Vikings with 15 points and 10 rebounds a game. She is second in steals behind Riley Krajniak, who is having a sensational senior season.

“It’s remarkable for her first year with these kids,” said Momrik. “She has fit in tremendously well with our team.”

“I could not even dribble the ball (when I started),” she said. “Something in my head told me to play basketball. So, I started it and I learned a lot.” She played club basketball in Germany since organized sports is not affiliated with the schools.

“That means only the players that are really tall and want to play, get involved because you actually have to pay,” said Elena Kalbitzer. “You play against some really good teams. All my teammates were my height or taller.” Elena Kalbitzer is 5 foot 8 inches. She was not counted on for points over there. Defense was her speciality, and that has continued in Posen.

“She is one of the best defenders we have seen,” said Momrik.

“But here it is different, they actually need me to score,” said Elena Kalbitzer. She’s on pace for a potential 300 points and 200 rebounds season.

The girl has talent, there is no question about that. She has impressed officials, sports’ writers, opposing players and fans.

Behind the scenes, though, she is one of the nicest kids you would meet.

“It’s weird that people know me and like the way I play basketball,” she added. “It’s weird because I have never had that before.” She has handled everything very humbly. For now, she is just enjoying the ride.

And I for one can speak for many in the area in saying, it’s been a blast watching her.