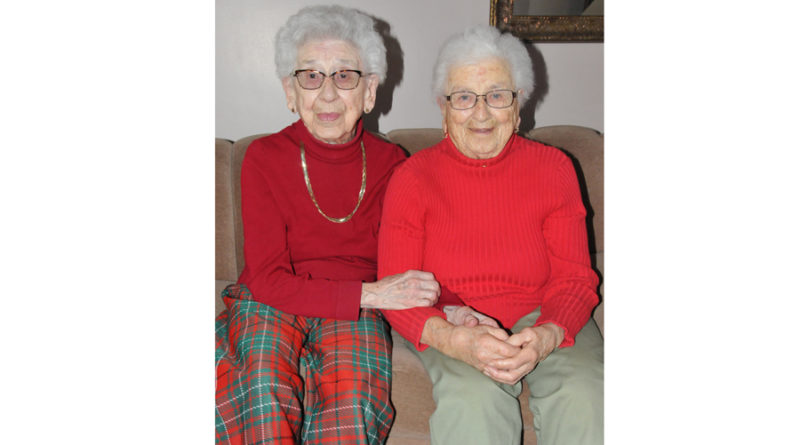 Happiness is having the world’s best sister.

Stella Smigleski and Sophie Zyracki can certainly say that about each other. Not only are the sisters connected by the heart, as most sisters are, but they have been sharing their later years of life together.

The two live in a cozy dwelling along Hincka Road. It’s two distinct personalities under one roof.

There’s Stella, the quiet centenarian, who may not have a lot to say, but does not need to because she has her sister, Sophie, to do it all for her.

SOPHIE IS a tough talking Polish woman with strong opinions.

What are Stella’s thoughts?

“Not much,” she answered. “My dad told me when I was young yet. One likes to talk and one is silent. That was me, silent.”

“She only talked when she wanted to,” Sophie interject.

Their lives are uniquely old-fashioned with a heavy emphasis on unique.

Sophie, who has been single all of her life, took care of their only brother until he passed away and then moved in with Stella and her husband Harry Smigelski.

Harry has been gone for eight years, leaving the sisters to fend for themselves.

“We live together like a family,” said Sophie, who admitted it’s no different than when they were children growing up. “Our immediate family is her and I. When we are gone, we are gone.”

The women never had children.

HOW THE sisters got to this point in their lives involves stories that have been told over and over by Polish immigrants.

Their father came over from Poland when he was 17 to start a life in Detroit and then brought his father over as well as other family members.

Stella was born in Detroit and in between the time the two sisters were born, the family moved to Posen. Sophie was the only one from the Zyracki family born in the Posen area. There was an older sister, but she was pushed down some stairs on a tricycle and died before the move north.

Years later, Stella went back to Detroit during World War II to work in the legendary Dodge Main plant as part of the war effort back home.

“You were a Rosie the Riveter, right?” Sophie asked her sister.

Stella nodded her head in agreement and said she worked on a little bit of everything.

Sophie worked for Gately’s Furniture Store in Alpena before being transferred to Petoskey in 1971. Sophie rattles off every year without hesitation. I have been retired 33 years,” Sophie said, who knows the year, too.

The secret to longevity is puzzling since their mother died at the age of 29. Their father at 59.

“My mother has been dead many years,” said Sophie. “Just think, I’m 98. I was 15 months (when she died). Oh, I see kids treating their mother like a dog these days. I say, you don’t know what it means to be without one.” The only photo the women have of their mother is from their parent’s wedding in a small room off of the kitchen.

Their grandfather picked up some of the motherly duties so their father could keep earning money to pay for the farm.

“WE EAT like we should eat,” said Sophie, pounding a figure on the coffee table. “Not the junk people eat today. We used to sit at the table and eat, not like today, where everyone piles around the television.” Sophie moved her hand toward her mouth as if there was a fork in it with a less than flattering zombie-like expression.

The women made potato pancakes the night before, and Melvin Chappa, who checks on them once a day, was bringing fish sandwiches from Alpena. It was a Friday.

As Lent gets closer, the deeply religious Catholic women, who sit in the same pew every Saturday afternoon at St. Casimir Catholic Church, were already in the groove.

“The other day we had sauerkraut and potato dumplings,” said Sophie naming of another meal the two had.

Everything is shared including the finances and chores.

Both cook alongside a 60-year-old combination wood/electric stove that was salvaged from a farm field appliance pile. It’s their Depression rearing showing through. It’s keeping the kitchen toasty warm, too, with the rocking chair that’s been there for just as long.

Stella still can bake bread and does the dishes. Sophie washes clothes, shops and many of the other household chores since she gets around a little better, although a cane assists a nagging hip.

ll drives, but not as much in the winter. Don’t act surprised around her when asking if she still drives because the answer will be: “Of course I drive.”

SOPHIE SAID she has not been in a hospital since 1946. “I have never been sick in all of my life,” Sophie said, pounding her finger on the table again.

“I never missed a day’s work – ever. I had one headache in my life. I was blessed with good memory and God has given me a good life. I never forgot how to talk Polish, either.”

Both are blessed to have each other and the sisterly love that comes as natural as taking care of family.