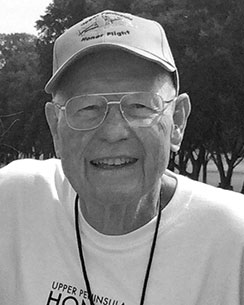 Paul grew up in Onaway and graduated from Onaway High School when he was 15. Following high school, he spent a year in Kansas City, Missouri, at a welding and machinist trade school. He moved back to Onaway briefly and then Detroit before he enlisted in the United States Army.

By this time, he had met and fell in love with Maxine Schram and they married November 29, 1952, before Paul shipped out for Korea. Upon his return, they lived in Onaway for a year and then moved to Detroit, where Paul worked for Greenwood Welding. In 1959, they returned to Onaway to raise their family where Paul ran his welding shop, Kramer’s Repair. Paul was an ordained minister, serving the Community of Christ Church for many years.

After he closed his welding shop, he went to work for Merchant’s Sawmill, while also starting Over the Road Trucking with his brother Kent. In 1986, Paul and Maxine moved to Sault Ste. Marie, where Paul drove truck for Michigan Milk Producers and then for A&L Iron in Kinross. He retired from A&L in 1998. Following retirement, he enjoyed working with his brother Kent on shop projects.

Paul was preceded in death by his parents; three infant brothers, Richard, August and John; and his sister-in-law, Bettyjean (Fred) Harbrueger.

No service will be held at this time.

Interment will be at Koehler Cemetery in Cheboygan.

R. Galer Funeral Home in Pickford is serving the family. Condolences may be sent to the family at www.rgalerfuneralhome.com.