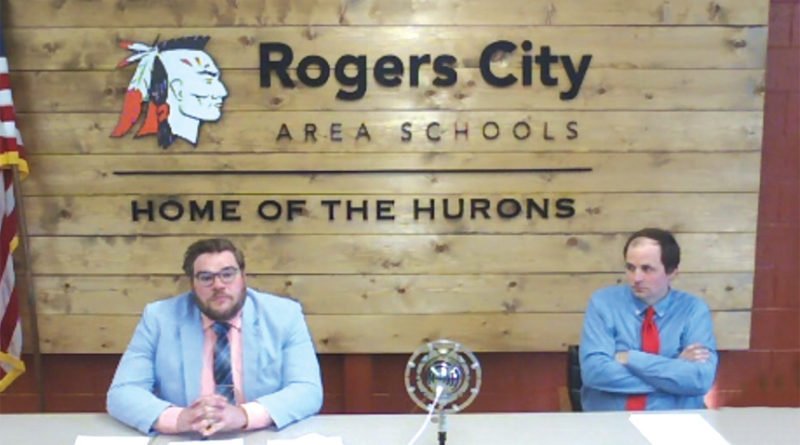 The novelty of a virtual meeting seemed to be a distant memory when Rogers City Area Schools (RCAS) superintendent Nick Hein painted a dire financial picture that is facing Michigan school districts.

With a new budget needing to be approved by July 1, Hein and the rest of the staff at the central office are preparing the 2020-2021 fiscal budget, but may have to juggle it without a large chunk of revenue.

Hein reported to the board that he has received information from a couple of sources, including the Cheboygan-Otsego-Presque Isle Educational Service District, that cuts of between $500 to $1,000 per student could be coming for the next school year and the board of education could be facing some very uncomfortable cuts.

“I know a lot of people like to get into the blame game, but this isn’t anyone’s fault,” said Hein. “The state is not the federal government and can’t print its own money. The state has to balance its budget.”

With tax revenues being down because of the novel coronavirus pandemic, school budgets are going to feel the pinch.

“Our school district will be able to absorb these costs, but it is going to require cuts in teaching staff positions in both buildings, as well as an aid and a custodian,” Hein continued.

Earlier in Monday’s meeting, veteran employees Colleen Vogler and Cindy Waibel were recognized by elementary principal Steve Kowalski with their retirement announcements. Longtime maintenance/transportation supervisor Kirk Schaedig is retiring, as well as fellow custodian Ann Reisner and paraprofessional Karl Grambau. RCAS is facing the distinct possibility that none of the valued employees will be replaced.

Hein also indicated that if the cuts per student reach fou

r figures, the sports’ program could be in jeopardy.

“Board members need to communicate independently or in groups of no more than three with the board president over the next month to build a consensus on what direction you want to go,” said Hein. “I will prepare plans for whatever is decided.

“Realistically, if you are not going to look at a cut in staffing, the only other thing we would have that would be substantial enough to offset these costs, you would be looking at massive cuts of possibly the whole athletic program, transportation. Again, those would be the other options.”

Hein said the unfortunate part of the situation is that Michigan school districts won’t know what the exact cut to the per pupil foundation grant will be until September yet RCAS is preparing its budget to be in place by the end of June. A budget hearing will be conducted next month.