Virginia “Ginny” Audrey (Kapalla) Minor, 87, from Grand Marais, died after a short illness Saturday, May 30, in the afternoon at her home surrounded by her beloved family.  She was born in Onaway July 3, 1932 to Elizabeth (Bruski) and Joseph Kapalla. “Ginny,” her nickname, had three older brothers, Edward, Floyd and Chet who all preceded her in death. 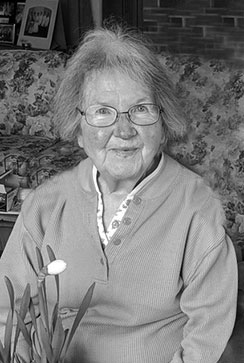 Virginia’s Catholic religion was very important to her and she lived a life of faith, love, kindness, thoughtfulness and humor (when she finally got the joke!), and was proud of her Polish heritage.

Ginny was a faithful choir member and reader at Mass and enjoyed attending her class reunions in Onaway. A quote her kids found she had copied down and left on her dresser is: “I began to understand…You weep at the loss of so beautiful a world and all those parts you will never be able to play again.” (from Pat Conroy’s “Beach Music”).

While this is so true, a poem Virginia has had on her kitchen wall is “Advice from a Tree”: “Stand Tall and Proud/Go Out On A Limb/Remember Your Roots/Drink Plenty Of Water/Be Content With Your Natural Beauty/Enjoy The View.”

She followed all of the above thoughts, for sure. Virginia definitely had the proverbial “well-lived life,” together with Carl raising her children while also teaching kindergarten, first, and second grades in Grand Marais, Grayling, Big Rapids, and other towns.  Her family has many fond memories of going to their cabin on a small lake in Harrison as well as snowshoeing, kayaking, and biking well into her later years.

Ginny enjoyed the simpler things like her walks on the North Country Trail, reading a variety of books, playing cards with dear friends, writing the column “Minor Musings” for The Grand Marais Pilot for many years, and playing her favorite melodies like “Clair de Lune” on her piano, which she did so well just days before her passing.  She had a beautiful singing

voice all her life, and if one of us even mentioned a song, she’d sing a few verses of it. Just being with her kids, grandkids, and great-grandkids talking and visiting was probably her favorite thing to do.

Besides her parents and brothers, Virginia was predeceased by her husband in 1990. She is survived by her children and also her grandchildren, Erica Mead (Darren Young), Laura Mead, Adam Kabe, Elizabeth (Malcolm) Mulry, Hank Minor, Wyatt Minor, Molly Minor, Lucy Minor, Brendon Wolf and Shannon Wolf; as well as great-grandchildren, Evelyn Young and Liam Mulry, with another, a boy, due in August.

Virginia’s funeral was Thursday, June 4, at Holy Rosary Church in Grand Marais, with interment following at the Catholic Cemetery in town.  She will be dearly missed by all who knew her.