Norman E. Schwartz, 84, of Black Lake, died at home Thursday, July 9, 2020.  The son of Edward and Ann (Mohar) Schwartz, Norman was born in Wilkinsburg, Pennsylvania and was raised on Lake St. Clair in St. Clair Shores. Norman married Sarah Ann Byam in Detroit February 23, 1968. They were blessed with 47 years of marriage when Sarah passed away in 2015. 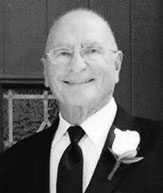 Very intelligent and driven, Norman was skilled at engineering and tooling, as well as re-engineering to improve things and make them better. With his abilities and technical skills, Schwartz Industries, which specialized in precision and experimental machining, was a very successful machine shop.  Norman eventually left the industry he excelled in and began working in real estate.

With Norman’s effort and initiative, a little intuition and his exceptional intellect he became a partner in a real estate development company. After retiring he and Sarah left Sterling Heights, retired to their home on Black Lake, and spent winters in Sarasota, Florida.

With his years growing up on the lake in St. Clair Shores, the many vacations spent at Black Lake, and his love for boating and water sports it was a move that suited Norman well.

Norman enjoyed traveling with Sarah and their friends and loved cars, especially fast cars, in particular, Corvettes. He was well-known for labeling almost everything with a date to see how long it would last, most likely so he could figure a way to re-engineer a superior option. Right until his final days Norman’s mind was always working to come up with something better or a solution to a problem. Generous, he donated to his church, to those in need, and to worthy causes but was humble and did not seek recognition for his contributions. He was kind and helpful, always ready to lend a helping hand or give advice when asked for. A devout Catholic, Norman was devoted to his Christi

Surviving Norman are his two sons, Michael (Melissa) of Romeo and their children, Samantha, Matthew, and Luke and Paul (Melissa) of Sterling Heights and their daughter, Emily Rose; as well as a brother, Robert (Veronica) of Florida/Arizona. Norman was preceded in death by his wife, Sarah, June 29, 2015; and a brother, Clyde.