Maj. Leon “Lee” O. Brockway, ret., 81, of Onaway, died at Munson Medical Center in Traverse City Tuesday, July 28, 2020. The son of Cecil and Electa (Livingston) Brockway, Leon was born in Flint May 24, 1939 and was raised in Swartz Creek. It was while attending Alma College that Leon, or as he was known, “Lee,” met Margaret “Meg” Campbell from Onaway who would become his wife. Blessed with nearly 59 years of marriage, they wed September 9, 1961 in Swartz Creek. 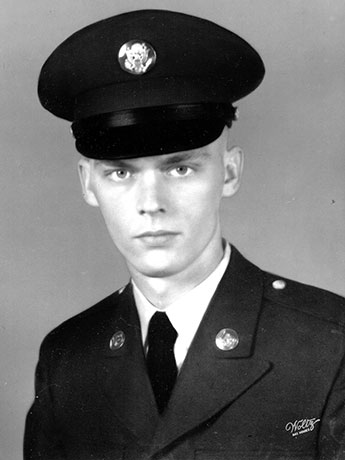 Lee made a career in the U.S. Army with his expertise being field artillery. Having served faithfully and honorably, he retired November 5, 1990 attaining the rank of major. He also worked as a lab technician at various facilities, one of them being Russell Memorial Hospital in Onaway. After his retirement from the armed forces he took civilian employment at Fort Sheridan, Illinois as well as running his boarding stable for horses in Lake Villa, Illinois and his carriage company in Long Grove, Illinois. With a love for horses passed on to him from his father, Lee’s knowledge of horsemanship was extensive. He and Meg eventually returned to Onaway to make their home on the farm where Meg was raised.

A man with many talents, Lee was creative and artistic. He crafted beautiful stained-glass pieces, including lamps, church windows and decorative items. Lee’s artistic abilities also included skillfully playing the violin and occasionally cutting a rug with a good old-fashioned polka or swing. Later in life he took up baking and became quite a good baker.  His family loved his delicious Kentucky butter cake, molasses cookies and peanut butter fudge. Lee’s greatest passion though was his family. He was a loving husband to Meg and a supportive father to Steve and Liz. He was proud of his children and their accomplishments but was even more proud of his grandchildren. His grandchildren were his pride and joy and no one loved being a grandpa more than Lee.

Lee will be remembered as a faithful Christian man who was dedicated to God, his church and his family. A longtime member and elder of Joy Community Church, he sometimes led Bible study and was active in church activities. He had a thoughtful heart for others, always ready to volunteer and pitch in when help was needed. He was proud of his service to our country, was very patriotic, and was a member of the Onaway American Legion Post 317. Kind-hearted, compassionate, respectful and humble, Lee was truly a gentleman who put others before himself.

Surviving Lee is his wife, Meg Brockway of Onaway; a son, Steve (Jan) Brockway of Twin Lakes, Wisconsin; a daughter, Liz (Scot) Szymoniak of Onaway; grandchildren, Brooklyn (Michael) Willett of Mount Pleasant, Lexi Szymoniak of Petoskey, and Maddy and Jacob Brockway, both of Twin Lakes, Wisconsin; as well as his sister, Linda Walker of Swartz Creek; a brother, Lyle (Charlotte) Brockway of Gladwin; and nieces and nephews. Lee was preceded in death by his parents; and a sister, Delores.