Robert “Bob” John Merrick, 60, was born May12, 1960 in Wyandotte, the son of John “Carl” Merrick and Kathleen “Kathy” (Malay) Merrick. He completed the family as the youngest of four children born to Carl and Kathy. 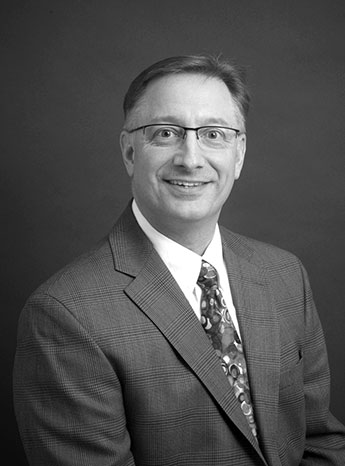 He grew up in Wyandotte, attending St. Cyprian Catholic School in Riverview. After his family moved north, he attended Onaway Area Schools, graduating in 1978. He received a Doctor of Optometry degree from Ferris State College of Optometry in 1985.

In 1985 he married Lori Smith in Utica. He worked as an optometrist in the Detroit area until 1993, when he purchased John Mitchell’s optometry practice in Cheboygan. There, he created his dream practice. He loved his patients and staff like family. He maintained membership in his professional associations, the Michigan Optometric Association and the American Optometric Association, throughout his career.

He served on the Cheboygan School board of education for just under 10 years, the last three as president. He was a founding member of the Bishop Baraga Boosters. He loved playing hockey in the Cheboygan Hockey Association (CHA) men’s league, and he coached youth hockey for the CHA.  Bob also loved golfing, especially when partnered with his father Carl, brother Mike or son Ben.

He was a proud member of the Cheboygan Golf and Country Club. After being introduced to geocaching by his son Wes, that became a favorite activity. Over the years, he was able to enjoy geocaching in different countries, as well as closer to home. He loved spending time with family and always had a smile on his face.

After being diagnosed with ALS (amyotrophic lateral sclerosis) in 2017, Bob had to step away from the profession that he loved. Despite losing the use of his body and his voice, he was able to remain well-connected to family and friends through regular visits and the use of advanced eye gaze technology. He remained optimistic always.

He is survived by his wife of 35 years, Lori (Smith); his two sons, Wesley “Wes” (William) of Wyoming and Benjamin “Ben” of Gaylord; and his brothers, Michael “Mike” (Jill) Merrick of Rogers City and David (Kimberly) Mer

rick of Texas. He was preceded in death by his parents, Carl and Kathy Merrick; and his sister, Susan (James) Ziegler of Cheboygan.

In lieu of flowers, Bob suggested memorials be made to one of the following:

A memorial service will be set at a future date.