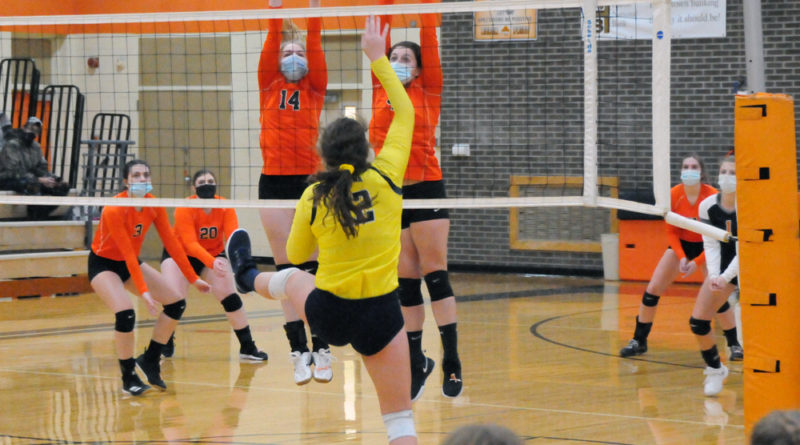 For the eighth time in 10 years, Onaway will be adding to its banner in the high school gym. With their seventh-straight conference match win, a home sweep of Mancelona, the Lady Cardinals (12-12-1, 8-1) captured at least a share of the Ski Valley Conference.

The scores Tuesday were 25-20, 25-9, 25-22. If Johannesburg-Lewiston lost its match Tuesday, the Cards will be sitting on top of the league all by themselves.

“If you go back to when we lost to Inland Lakes, we did not play well and they made us pay for it,” said Onaway coach Steve Watson. “If you had gone in the locker room after that match and said we are still going to be conference champs, I think everyone of us would have taken it.”

One of the keys in the run was being dialed in from the serve line.

“We never really try for aces, and that’s not how I coach, we just try to serve tough and strategic and place the ball in certain places,” said Watson. He also said his hitters continue to do a terrific job. For example, in two conference matches and a tri-match at Sault Ste. Marie, Lexi Horton and Macie Decker have combined for 29 kills and only committed three errors.

“That is huge,” added Watson. “Overall, the team play has gotten better.” He also said it took a while to get up to speed, especially since some of them did not play summer ball because of the novel coronavirus.

Breya Domke and Horton had eight kills each, while Domke registered 10 aces. Cloe Ehrke had 17 assists.

The Cards travel to Mio today (Oct. 22) and East Jordan Tuesday before heading to Posen for the battle of the county. They get Posen to open up district, Nov. 2, at Hillman.

“Let me just start off by saying that if we didn’t have bad luck in the month of October, we’d have no luck at all. Over the last four weeks, we’ve had virtually no practices as a full squad due to seasonal illness and injuries let alone bringing a healthy squad to a meet,” said Rogers City volleyball coach Jon Hoydic.

In addition to being swept by both Oscoda and AuGres last Thursday and by Alcona at home Tuesday, the Hurons lost a key player to injury. Defensive specialist and one of the team captains, Kristin Brege suffered what appeared to be a season-ending injury in practice last week. Brege is a four-year varsity starter, brought up as a setter early in her freshman season and helping the team to the final-four in Battle Creek.

“Fielding a team of 14 has given us a lot of options over the course of the season but only bringing 12 to this meet and missing two seniors meant that we would really have to rally around each other to come out on top,” Hoydic said.

The slow starts that have plagued the Hurons throughout the year showed up again and Rogers City was quickly down nine points in the first set against Oscoda. The Hurons lost 0-3 (13-25, 20-25, 15-25) to the Owls.

“We eventually found ourselves, but we basically never had a chance in that one,” Hoydic said. “The second set saw us finally playing together at bringing our best in flashes. We played an excellent set against a good team and unfortunately just didn’t get the key plays when we needed them causing us to come up just short.”

Just when it appeared the Hurons were playing better, things turned for the worse. After consistently getting better and creating some momentum, about halfway through the third set, in a tight game, sisters Emma and Alexis Budnick collided.

“Their injuries required both to be removed from the game and the loss of Emma left us with only one setter,” Hoydic said.

Being a team that has been running a 6-2 offense for most of the season, where there are two setters on the floor at all times, the Hurons needed to change the game plan and run a 5-1 offense for the rest of the night.

“This was a tall order and a lot of pressure to put on sophomore setter Kaitlin Nowicki. She handled it like a champ. The rest of the night didn’t go well for us. The match against AuGres was definitely a letdown. But, with all the adversity we’ve faced, I was proud of the fact that we never gave up and battled to the final point,” Hoydic said.

With the regular season winding down before the start of the districts, the team faces many challenges and questions, the coach said.

“Were there things that we should have done differently? Were there too many unforced errors? Did we not execute our game plan to the best of our ability? Absolutely. Do I think that they did the best they could, given the injuries and circumstances? Absolutely. My job over the next few days is to help this squad find a way to use our recent misfortune as fuel to finish this season as one they can all be proud of,” Hoydic said.

The coach said many good things came out of the matches, including the return of junior Ila Bisson from the injured list.

“Ila’s work ethic and attitude are infectious. Being an athlete with a specialized role, she often has to come into the game cold and immediately execute, which she does and did in every situation.  It›s awesome to watch her play. Ila understands what it means to hustle,” Hoydic said.

He also praised the work of Nowicki and senior Chloe Hentkowski.

“Kaitlin played five-straight sets without rest in Oscoda, two of which she had to institute and run a brand-new offense. I believe a veteran senior player would have a difficult time with that workload.  Kaitlin shouldered it without question and did everything she could to help her team. Chloe had the difficult task of taking over Kristin’s libero duties. Chloe stepped up, took on the responsibility, and never looked out of place,” Hoydic said.

Not wanting to be swept by the Tigers on Parents’ Night at Rogers City High School, the Hurons got off to a great start in the third set. An ace by Dittmar came in front of a kill by Talaske as Rogers City led 5-2. A block by Nowicki, a kill from Sorget and an ace serve from Hentkowski built a 9-3 lead for the home team. Hardies set for kills by Sorget and Bredow gave the Hurons their biggest lead at 14-7.

“We started off pretty strong in the first set, which was really nice to see. I think the girls really wanted to come out strong and play for their parents. It really meant a lot to them to come out and show what they had. We got off to a good start and then ran into a good server,” Hoydic said.

Posen lost to Hale 0-3 (15-25, 11-25, 18-25) on Seniors’ Night for the Vikings. Coach Michelle Styma honored the efforts of seniors Hailey Styma, Madison Menzel, Aubrey Sims and exchange student Julia Maura before the match. Each girl had one teammate read a testimonial about a senior before gifts were presented to the senior player.

The Vikings fell behind in the first set 8-3, before a 4-1 run to pull closer. Ava Wesner’s kill from the left-hitter slot, made possible by a set from Mak

ayla Kamyszek made the score 9-7 ahead of another run by Hale. Kills by Menzel, an attack error and a kill by Abigail Schellie were the only points for Posen as Hale took a 20-11 lead in the set.

“The girls played really well defensively, getting under the ball. We just could not get our serve-receive going,” said coach Styma after the match.

Mia Newhouse had 19 digs and two kills; Menzel had five kills, an ace and a block; Kamyszek had 12 digs and nine assists and Schellie had two kills and an ace.

The Vikings play in Hillman Thursday. 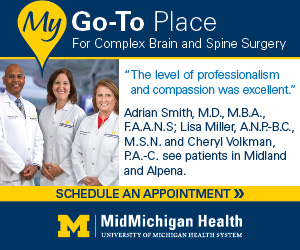