Ervin “Erv” R. Nowak Jr. started his final flight October 1, 2020 surrounded by his crew, due to complications from surgery. He was born June 2, 1967 in Rogers City to Ervin and Shirley (Swan) Nowak Moulds. 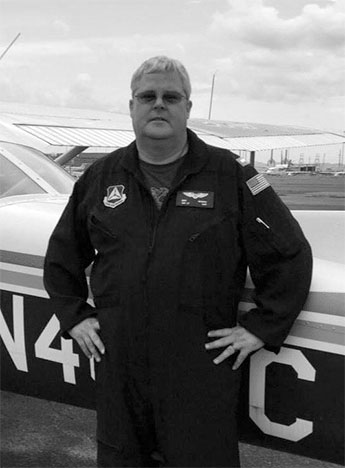 Erv’s passion for airplanes was sparked by his love of flying with his father. After graduating from Rogers City High School, he joined the Air Force, and was stationed throughout the world maintaining and working on various aircraft. After a career of 21 years, Erv retired from the service as a master sergeant. He then started a new career as an aviation inspector in Brunswick, Georgia, where he met Charla Miller, the love of his life. Charla became Erv’s co-pilot in life April 6, 2013.

They shared a love for the water, including scuba diving, Jet Skiing and boating. Erv’s dog, Jaida, loved going with them on the Jet Skis and boat. For several years, they did diving trips with family.

Charla’s family was an important part of their life. There were many trips to Lake View, South Carolina to visit Charla’s father Charles Miller, and brothers Chuck Miller (Gwen) and Chris Miller (Holly).

Erv’s proudest and happiest moment was June 5, 2014, when Charla and Erv’s son, Tanner “Sprout” Ervin Nowak, was born and completed their crew. Erv and Tanner were best buddies; they spent many hours jamming to music, fishing in the backyard pond, and fixin’ things. Along with lawnmower races around the yard, Tanner spent many hours flying beside his Dad.

Erv joined and gained the rank of first lieutenant with the United States Civil Air Patrol, where he achieved the status of aircraft maintenance officer and logistics officer.

His volunteer work in the Brunswick Senior Squadron allowed him to fly search and rescue missions in Georgia and Florida and included rescue missions to Puerto Rico after Hurricane Maria. Aviation was the link for many deep friendships including his widespread group of pilot friends, especially the NRFO uncles, and he will be sorely missed.

Erv was welcomed at the end of his final flight by his dad, Ervin Nowak, and his mother-in-law Sandra Craft Miller.

Erv will be remembered for his deep laugh, Tannergrams, “more cowbell,” love of a good spitzer game, best ribs around, sharing a cold beer, joyr

iding in his FJ (buckle up Tanner!) and the cleanest vehicles in town. Sunday nights won’t be the same without his weekly phone calls, and his brothers will miss his shared endless knowledge of aircraft.
Due to Tanner’s young age, we respectfully request that all friends and loved ones write a favorite story or memory for a keepsake memory book. Please send to charlamiller@hotmail.com.

Edo Miller and Sons Funeral Home of Brunswick, was in charge of all arrangements.