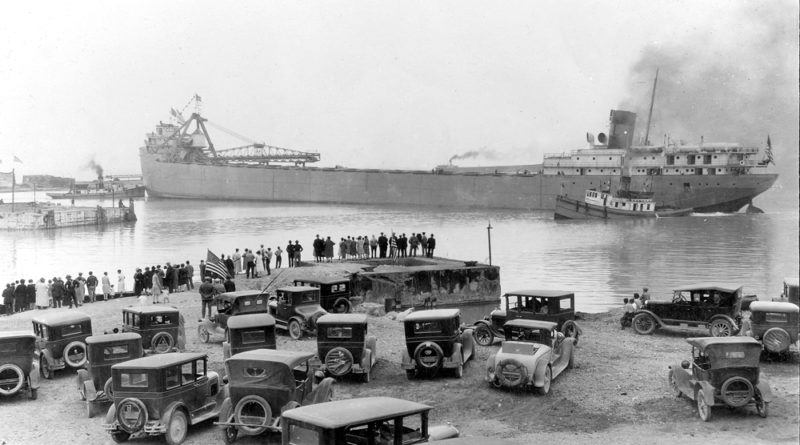 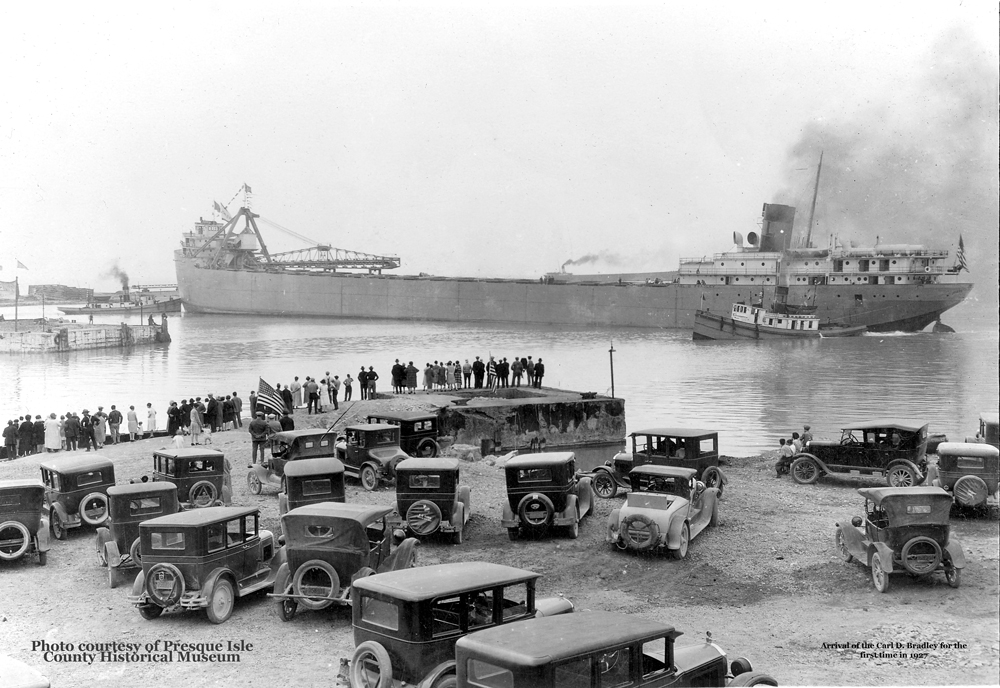 (Updated from the Nov. 2018 edition of the Advance)

by Peter Jakey–Managing Editor
Nov. 18, 2020 is the 62nd anniversary of the sinking of the steamer Carl D. Bradley.
It was on the evening of Nov. 18, 1958, the Bradley and its crew of 35 found itself in the middle of a terrible storm in northern Lake Michigan.
At approximately 5:30 p.m., a loud thud was heard aboard the ship.
“This is the Carl D. Bradley. Our position is 12 miles southwest of Gull Island. The ship is breaking up in heavy seas. We are going to sink. We’re going down.”
That was the mayday distress call that went out from first mate Elmer Fleming aboard the ill-fated steamer.
She did go down.
Only two men survived with 23 of the 33 lives lost hailing from Rogers City.
The men who died continue to be remembered.

***
It’s the reason the Great Lakes Lore Maritime Museum (GLLMM) commemorates the date each year. Since it is the 60th anniversary, more has been added to mark the occasion.
Much like the 50th anniversary, the ceremony will be at the Rogers City Theater with the tolling of the actual Bradley bell by family and friends. It will start at 1 p.m.
One of the names that will be read Sunday will be James “Jimmy” Selke, who was only 18 at the time of the sinking.

***
A 1958 graduate of Rogers City High School, he turned 18 in June 1958.
Jimmy decided to go sailing, like a lot of young men from town. He already had a father, uncle and cousin who were sailing the Great Lakes. Jimmy signed up to sail on the T.W. Robinson.
Jimmy got the call to take the position of porter on the Bradley in place of George Sobeck, whose father had passed away.
Jimmy’s dad Alex “Shine” Selke was very happy to have his son sailing with Captain Roland Bryan, as he himself had sailed under Bryan, and held a high respect for him.
Jimmy was the youngest on the boat that day, even though he had a couple of classmates there, too.
“Jimmy was very popular in school,” said sister Gail Pardike of Millersburg. “He was very well-liked.”
“He wanted to go to college,” said Bob Ware, who was a close friend and a fellow graduate of the Class of 1958. “He did not have the money, and his parents did not have the money. He decided he was going to work a year or so. That’s why he was on the Bradley that fall.”
Jimmy was a good athlete who enjoyed playing basketball and tennis. “We had a tennis team at that time in Rogers City,” said Bob. His sister still has her brother’s racket stored away as a prized memento.
Jimmy had been dating Geraldine “Getz” Tulgetske at the time of the sinking. She gave him a piece of luggage because he did not have one. It had been one of her graduation gifts.
“He was a super, super friend,” said Geraldine, who was his prom date that year. “He was a good-natured friend and a friend to everyone.”

***
On the Bradley, Jimmy was working in the galley.
Gail, who was 8 years old, still remembers being at the Texaco Station at the corner of North Third and Superior Street. It’s now Peacock Family Chiropractic.
“I remember it like it was yesterday,” said Gail. “I was with my mom (June) and aunt Sophie Laguire…we went there to get gas and Mr. Hilla came out and he says, ‘did you ladies hear, one of the Bradley boats went down.’ I remember my mom looking at my aunt and saying, ‘Shine! Jimmy! Jim!’ Just rattling off these names of our relatives.”
Then, Mr. Hilla said he had heard it was the Bradley. 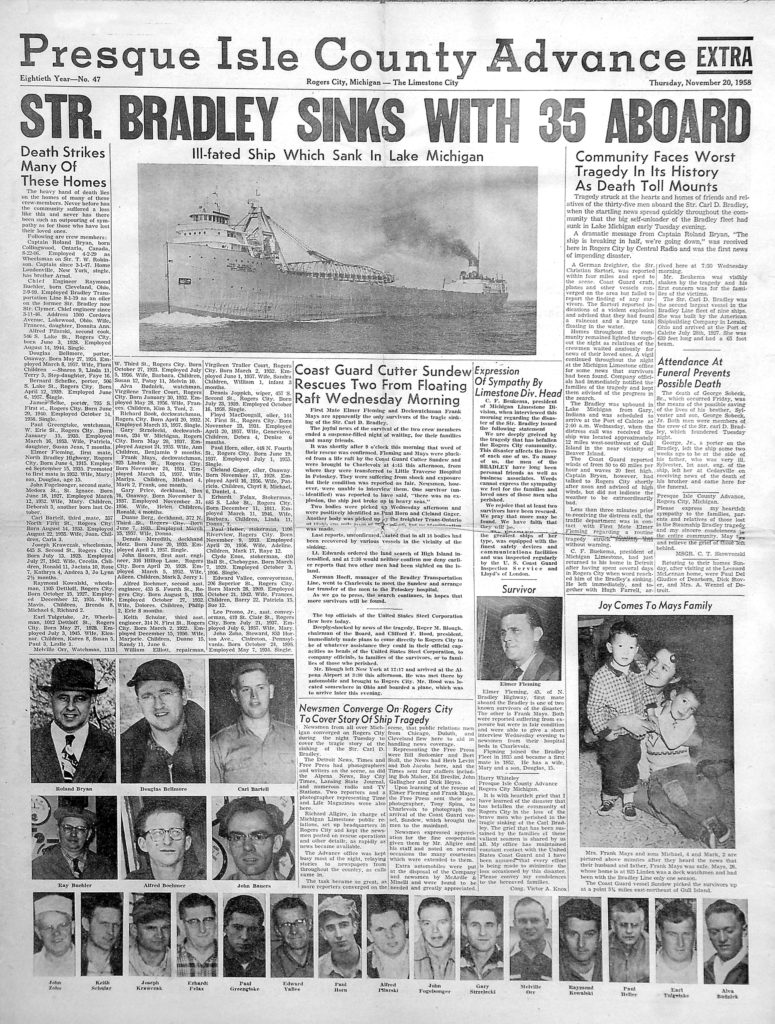 “My mom immediately broke down,” said Gail. “We went immediately home. My dad’s boat came in that night, and he stayed home of course.”
“You could not believe that it happened,” said Bob.
The family held out hope that Jimmy and the rest of the men would be rescued.
“My mom always did,” said Gail. “She told everybody, he’s on an island somewhere, because he was a good swimmer. She always thought that he had to have made it.”
June could never come to grips with the loss of her son and decided not to attend the service at St. Ignatius Catho

lic Church.
“It was very depressing,” said Gail. “I remember going to a friend’s birthday party and I sat upstairs with the adults, at the radio, listening to news of the search going on.”
Jimmy’s body was one of 15 never found.
Gail said people would stop by their home at the end of South First to offer support.
Jimmy’s brother Don Selke, who passed away in April this year, was serving in the Marines in California at the time of the sinking and hitchhiked across the country to get home. When truckers heard Don’s story, they wanted to help by getting him as far as possible. 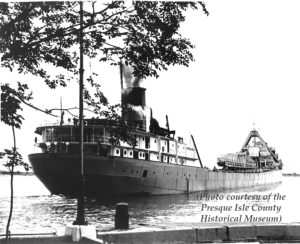 During the 50th anniversary, Gail rang the bell, but her mother still did want to attend.
“We think that with all the discussion of the 50th (anniversary), and a couple of other things that happened in her life, contributed to her passing away,” said Gail.
It bothers Gail that her brother Jimmy was at the crossroads of life and was not given a chance.
“Because he was such a good kid,” she said. “He deserved a chance, and it was taken away from him.”
Gail said she is the only one from the immediate family still alive and believes her brother’s memory will live on through her daughters. “We talk about him all the time.”
Bob said there were four or five friends who used to hang around together. “He was the first to go and I am the last one left,” said Bob. “I think about him often.”
Jimmy was inducted into the GLLMM in 2009. Gail accepted the certificate, while Getz looked on from the audience.