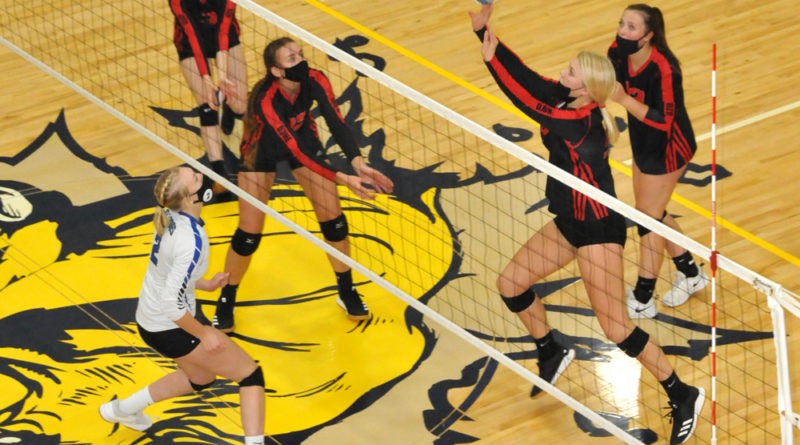 The Onaway volleyball program won its third-straight district title last Thursday, before the season came to a crushing end Tuesday at the hands of Inland Lakes (IL) in a regional semifinal match played at Wolverine High School.

The Lady Cardinals (18-13-1) had won every set in the Division 4 state playoffs, including the first one Tuesday against the Lady Bulldogs (25-13).

It was a perfect start for Onaway, but the momentum pendulum took a quick and sudden swing into IL’s direction in a lopsided loss in set number two (12-25). The Cards were down by as much as 3-15. From there, the mistakes mounted and Onaway played catch-up the rest of the match, until one last effort late in the fourth to stave off elimination.

The final point came on a Bulldog ace, bringing the season to an end. The scores in the final two sets were 15-25 and 21-25.

“From the second set on, Indian River played solid,” said Onaway head coach Steve Watson. “They gained confidence and we did not do enough to take it away from them.”

Watson, searching for the positives, said his girls fought until the end.

IL made a series of miscues in the first set to give Onaway a slight 14-10 lead when Cloe Ehrke stepped to the serving line and guided the squad to eight-straight points, including two-straight aces and a third for extra measure. She would finish with four. Add in an Aubrey Benson block and the Cards were sitting pretty. Breya Domke had one of her team-leading 14 kills (14 digs) for game point before IL hit one out.

IL kills in the third put Onaway behind by a margin that they could not erase. Watson was pulling out all the stops, calling several timeouts to try and recapture the momentum from the first set with no success.

In the fourth, down 11-18, all four officials were questioned about IL having four hits on one play. Watson held up four fingers to the officials and the Onaway fans provided their input to no avail.

The team rallied from that point on with an Ehrke tip to the back, kills from Nicole Larson and Domke, before a Macie Decker ace got them to within two, 20-22. The confidence level from the first set was back, but when a potential kill shot went into the net for a 20-23 score, the air from the comeback was gone.

“While (the run) was unfolding, I’m watching our movement on the floor, and it was still not good enough,” said Watson. “We made them sweat, but what I was watching was a few good shots; couple of good serves; but not enough precontact defensive volleyball.”

The one stat line that discouraged the coach was the 22 errors compared to 24 kills. “You cannot win like that,” said Watson.

The Cards earned a

“We have more to give, but you could see flashes of how good we can be,” said Watson on the Hillman floor. “We have to do a better job taking care of the ball, but I’m pleased with a lot of our play. It’s a district and you’re always excited to put a number up on the banner and take a trophy home.”

Domke was the leader with 14 kills and Ehrke turned in 21 assists. Horton delivered seven kills and four aces.

The Cards lose Breya Domke and Jazmyn Friant to graduation.

“They both have come a long ways,” said Watson. “Obviously, Breya is well-known around northern Michigan volleyball and Jazmyn made herself a very valuable player to this team. She loves the game. I always tell them, I don’t sleep well after we lose. There are only four teams that end the season happy. Everybody else is disappointed. There is not much else you can say to the seniors except, thanks for sticking it out with us