Beatrice Elizabeth Essig of Cadillac was born February 15, 1923 in Rogers City to Alfred and Bertha (Karsten) Rieger. The Lord called her home Saturday morning, November 14, 2020 at the age of 97 years. 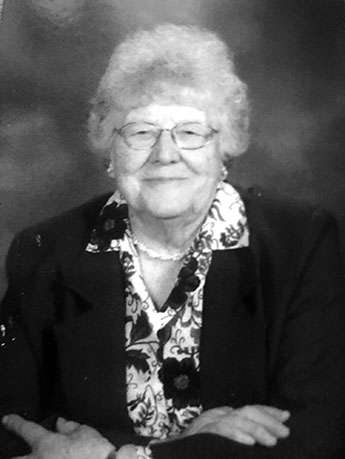 In 1941 she graduated from Rogers City High School. Her first position as a secretary was at ALCOA in Detroit.  In the following years she served in the same capacity at St. Johns Table Company and TV 9 & 10 in Cadillac and St. Paul Lutheran Church in Flint.

The Rev. Raymond A. Essig and Beatrice were married March 17, 1945 at Bethany Lutheran Church in Detroit. Their first home was in Melfort, Saskatchewan, Canada. They also lived in Jamison and Bloomfield, Nebraska; Columbus, Ohio; and Petoskey and Cadillac. His last parish was at Emmanuel Lutheran Church in Cadillac. Their marriage was blessed with four children.

Those who preceded her in death were her husband who was called home in 1975; a son, Richard in 1995; two sisters, Erna (Paul) Claus and Arlis (Kenneth) Krause; a brother, William (Gertrude) Rieger; a son-in-law, Robert Muir in 2019; and a brother-in-law, Richard Geyer.

She served her Lord in many ways. Some of her activities included teaching Sunday School (to young children as well as high school students) and women’s Bible study groups, leading devotions, choir, ministering to pastors’ widows in Michigan, sending cards and notes to those in need, visiting shut-ins, etc.; and she held offices on all levels in Michigan for the Lutheran Women’s Missionary League (LWML).

For relaxation she enjoyed working in her flower gardens as well as being an avid fan of the Detroit Tigers. Writing was another hobby; whether it was articles on various subjects: devotions, prayers or letters. Vacations were spent traveling throughout the country as well as abroad to Japan, Korea and Germany.  After living in F

lint for 20 plus years she returned to Cadillac in 1997 to be near to her daughters.

A Service of Celebration will be held 11 a.m. today (Thursday, November 19) at Emmanuel Lutheran Church in Cadillac with the Rev. Richard Collin officiating. Visitation will be one hour prior to the service. Burial will be in Memorial Park Cemetery in Rogers City.

In lieu of flowers contributions may be given to LWML or Hospice of Michigan Cadillac Chapter. An online guestbook is available at www.petersonfh.com.