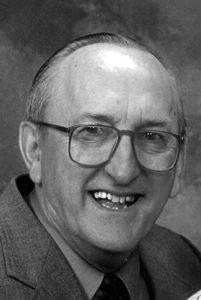 Don was born in Riggsville, March 13, 1931, to Joseph and Josephine Bur, as the youngest of 15 children. He grew up on a family farm where he acquired his strong values of faith, family and enjoyment of the simple things in life.

Don was one of the few children in his family who graduated from high school. He went on to Michigan Technological Institute in Houghton, where he studied forestry management. During a summer break spent at the University of Michigan Biological Station he met his lifelong love of 58 years, Mary Janet Kennedy. After college, Don joined the U.S. Army and served as second lieutenant in San Francisco, California, for three years. During his service Don and Mary were married at St. Mary Chapel in Ann Arbor. After finishing his active service in the U.S. Army he took his wife to La Crosse, Wisconsin.

Walking through the woods was second nature to Don. The north woods is where he showed his children the beauty of wild flowers, virgin pine trees, hunting, ice fishing and plenty of canoe trips on winding rivers and sitting around the campfire.

During berry season, Don took his kids and picked buckets of blueberries, strawberries, raspberries and blackberries. He helped coach his son’s baseball teams and loved watching and playing the game himself.

Don and Mary were members of St. Anne Catholic Church where Don ushered nearly every Sunday. Don was also a charter member of the Boulder Junction Lion’s Club, founded in 1972, for which he served as president for two terms. Don was very involved with the Boulder Junction Public library, as he loved to read. He was also an active member of the American Legion Post 89 in Minocqua, Wisconsin. During his retirement, Don enjoyed helping people for many years volunteering at the Howard Young Medical Center.

Don was loved by his family and friends and especially his many, many, many nieces and nephews that affectionately called him “Uncle Donny.”

Don was preceded in death by his parents; siblings; and wife. He is survived by his children, Michael, Stephan (Mary Talend), David (Lorrie Ritchie), Daniel (Luzia Tavares), Ann (Bruce Markuson) and Kathryn (Edward White); and his 17 grandchildren.

Don’s family would like to extend a special thank you to the staff at Laurel Oaks Senior Community in Glendale, Wisconsin and Virginia Highl

ands in Germantown, Wisconsin. Their loving care was especially appreciated during this difficult time.

“Our dad was a soft-spoken and gentle man. He enjoyed the company of people in his community and said ‘Hi’ to everyone he met and was always thankful for all that he had in his life.” Don’s family invites all who wish to honor Don, to make donations to Trees for Tomorrow at treesfortomorrow.com or Catholic Relief Services Worldwide at crs.org or simply plant a tree in his honor.

Mass of Christian Burial will be celebrated at a later date.