“…but those who hope in the Lord will renew their strength.

They will soar on wings like eagles; they will run and not grow weary; they will walk and not be faint.” Isaiah 40:31 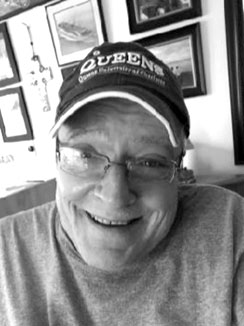 Don was born March 8, 1957 to the late John C. and Carol P. Kromer in Sandusky, Ohio, third of their six children.

In 1975, Don moved with his family from Columbus, Ohio to Alpena. After completing an associate degree at Alpena Community College, Don transferred to Northern Michigan University to pursue a bachelor’s degree in political science. These plans were put on hold in August 1978 when Don suffered a spinal cord injury in a diving accident. As a result, Don was paralyzed from the chest down and confined to a wheelchair. Proving his doctors wrong, and with the unwavering support of his Lambda Chi Alpha brothers, Don returned to Marquette in January 1979 and finished his degree requirements in the spring of 1982. After living and working in Alpena for a few years after graduation, Don moved to Tempe, Arizona to pursue teacher certification. Don taught high school history in Tempe until the pull of family led him back to northern Michigan. Don lived on Mullett Lake until 2003 when he moved to Rogers City. In Rogers City he found a close-knit community that he could call home. He became active in the community, volunteering at Tendercare and mentoring/tutoring youth through the schools. Continuing this commitment to service, Don ran for and was elected to the Rogers City Area Schools board of education in 2010, a position he held until December 2020. Don also contributed to the community in his position on the Rogers City Housing Commission. Don’s great gift was connecting with people. He lived by the mantra, “Patience, Peace and a Positive Attitude.” To the many young people in his life, he gave the precious gift of time and attention. He was always ready to listen, teach, play, and share life lessons. Don loved his friends and neighbors at Hilltop Manor, and enjoyed sharing a movie, a conversation, a devotion, and an occasional sip of wine with friends. He had a passion for Ohio State Buckeye football, and often had to watch the games on repeat the following day instead of live. A perfect day for Don would involve family, friends and a beautiful day on Mackinac Island.

Don is survived by his siblings; Edward (Jenifer) Kromer, of Gaylord, Robert Kromer of Seattle, Washington, Philip (Megan) Kromer of Mackinac Island, Laura (Matt) Pomerville of Empire, and Carol (Mike) Arakelian of Livonia. Don will also be greatly missed by the lucky 11 individuals who had the great good fortune to call him Uncle Don; Jason and Sally Kromer, Scott and Joe Kromer, Lianna Pomerville, Gabe and Derby Kromer, and Caroline, Nick, Becca and Maria Arakelian; as well as the three great-nephews who will hear the Uncle Don stories passed along, Luke and Matthew Kromer, and Colton Kliamovich.

Uncle Don’s love for his family was limitless; he was always available for a laugh, a kind word of encouragement, some sound advice, and of course a prayer. Occasionally in this l

ife we are lucky enough to find ourselves in the presence of grace. Don let his light shine, and his legacy will continue in the lives of those he touched.

Don’s wishes were to be honored in our hearts and memories without a gathering.

He was an avid supporter of high school sports, and those who are so inclined are invited to make a memorial donation in the name of Donald Kromer to the Rogers City Hurons Athletic Boosters: http://www.squareup.com/store/RCHSboosters or Athletic Boosters (Amanda Karsten), Rogers City Area Schools, 1033 West Huron Ave, Rogers City, MI 49779.