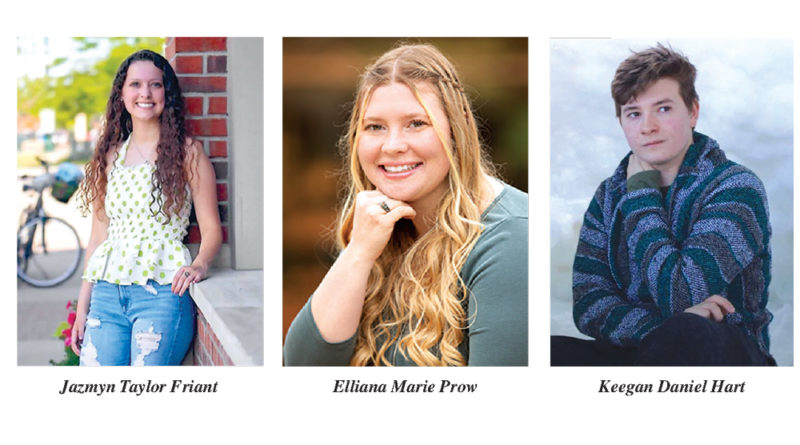 All three students have led their class in such a positive manner,” said Mix. “Between their push in the classroom, playing field, workplace, dual enrollment and extracurricular events, they have worked so hard and it’s great to see them rewarded with these elite academic honors.”

The class of close to 40 students features 14 students graduating with grade point averages above 3.00.

Valedictorian Jazmyn Friant (3.9806) is the daughter of Amanda and Brian VanTiem. She was part of the student council and a class officer all four years. She was inducted as a sophomore into the National Honor Society (NHS) and became a member of the orange team as a sophomore. She also served on the Youth Advisory Council (YAC) the last two years.

Jazmyn was in the snowcoming court as a freshman and in the fall homecoming court her senior year. Along with playing travel volleyball and playing varsity volleyball all four years, she was involved in track and field in ninth and 10th grade.

She plans on attending North Central Michigan College (NCMC) and then transferring to Lake Superior State University (LSSU) to get a bachelor’s degree in forensic chemistry.

Salutatorian Elliana Prow (3.9097) is the daughter of Stephanie Prow and Gary Prow. She was inducted into NHS her junior year and became a member of the orange team as a junior.

Along with her involvement in high school rodeo, Elliana has been part of the softball program throughout high school and plans to be part of the team this spring as well. She also was in volle

Her plans are to go to LSSU to obtain a degree and become a Michigan Department of Natural Resources conservation officer.

Honor student Keegan Hart (3.9000) is the son of Michael Hart and Eunice Hart.

Keegan has been involved in band all four years, as well as solo/ensemble as a freshman. He has been a volunteer at his church and has worked his last three years of high school.

He plans on studying accounting at NCMC.

(The complete list of OHS honor grads appears in the April, 1, 2021 edition of the Advance/Outlook)