Everal Irene Fesko, 97, of Tower, died Friday, April 23, 2021 at Castle Rock Retirement Center in Saint Ignace. The daughter of Emery and Bessie (Chase) Schonfeld, Everal was born in Ecorse October 24, 1923 where she lived until 1985 when she moved to northern Michigan to live on the shores of Tower Pond. Blessed with 63 years of marriage, Everal and Edward “Ed” J. Fesko wed June 23, 1956 in Ecorse.  Ed preceded Everal in death March 3, 2019. 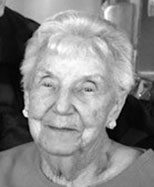 A devoted wife and mother, Everal not only was a wonderful homemaker but also worked for Ecorse Public Schools for 33 years as a librarian and secretary. Being an avid reader, Everal’s job was one that suited her well. She retained much of what she read gleaning a fair amount of knowledge on quite a variety of subjects. She nurtured a passion for books and the thirst for knowledge in many students as well as instilling a love for reading in her grandchildren.

Everal loved to travel and planned a family camping vacation each summer to a different state. Through her 97 years she visited every state except Hawaii, enjoyed many cruise ship vacations, as well as traveling much of Europe. When she was in her 70s, Everal, along with her sisters and niece, traveled the Alaskan Highway to the Bering Sea where Everal promptly jumped in and went for a swim! Quite an adventurous group of gals, they camped along the way truly experiencing the rugged wilderness.

With her many hobbies and activities, Everal was quite busy. She bowled on leagues and golfed on the women’s golf league at Stoney Links. She and Ed enjoyed square dancing, playing euchre and pinochle at Tower Tavern, and cross-country skiing which they did until they were well into their 80s. Everal loved going for walks around the pond and swimming.  She was always the first to go for a swim in Tower Pond each spring and in the fall, after everyone had put their bathing suits away, Everal would go in for her last dip of the season. Devoted to her faith, Everal was a longtime member of the Onaway United Methodist Church and United Methodist Women. She was an active member of the Onaway Veterans of Foreign Wars (VFW) Ladies Auxiliary and enjoyed visiting with the girls each week at Tops.  Generous with her time Everal could be counted on to help with church and VFW activities.  She gave blood regularly and was recognized for donating more than 5 gallons of blood throughout the years. Needless to say, she was a little disappointed when told she would no longer be able to donate due to her declining health. An avid quilter, Everal set a goal to sew 100 lap blankets each year which she generously donated to the Onaway VFW Post and the United Methodist Church.

Everal was a kind and gentle lady as well as being strong and independent.  She was well-loved by her children, grandchildren, great-grandchildren and all who came to know her. Sweethearts and best friends, she and Ed adored each other. They truly were an example of what true love should be.  She was a wonderful friend who never had a bad word to say about anyone.  Friends were made to feel like family in E

veral’s home and all were welcome. With her adventurous spirit and a zest for life, Everal was an inspiration to her family and all who knew her.

Surviving Everal are two sons, Edward Jr. (Pearl) Fesko of Onaway and Jerry (Junell) Nichols of Longview, Texas; as well as 19 grandchildren; numerous great-grandchildren; and great-great-grandchildren. She was preceded in death by her husband, Edward; a daughter, Joyce Heiman; a son, Alan Nichols; a great-grandson, Kaine Joseph Fesko; sisters, Laura LaFramboise and Phyllis Crist; and a brother, Niles Schonfeld.

Visitation will be held at Chagnon Funeral Home Friday, April 30, from 4 until 8 p.m. followed by a funeral service at 4 p.m. Saturday, May 1, at the United Methodist Church in Onaway. The Rev. Yoo Jin Kim will officiate. Everal’s final resting place will be in Flat Rock at Michigan Memorial Park where there will be a graveside service at 1 p.m. Friday May 7.