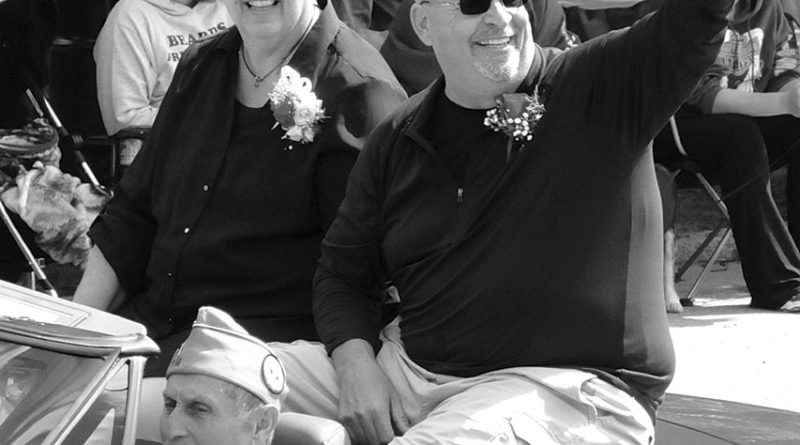 A community is in mourning following the passing of Randy Idalski at the age of 58.

The super-likable, former Posen Chamber of Commerce (PCOC) president, who served 18 years as president, has been Posen’s voice of sports, parades and pageants for a quarter-of-a-century.

Randy and his wife Laura, who had been married for 33 years, were the Posen Potato Festival’s last grand marshals since the 2020 event was canceled due to the novel coronavirus.

He had been the head dispatcher at the Presque Isle County Sheriff’s Office (PICSO) at the time of his passing. His last 12-hour shift was last Thursday.

Presque Isle County sheriff Joe Brewbaker said, “He was such a valuable asset to our department and the community, and most of all, to his wonderful family.” Before joining the PICSO, he drove a charter bus and worked as a paramedic.

“His demeanor and knowledge involving medical emergencies was so helpful to people calling central dispatch,” said Brewbaker. “And how he related to people and could get along with anybody, that’s what made him so valuable.”

Brewbaker said Idalski passed away of an apparent heart attack at his home.

“According to the call we got from his wife, he had walked out to the kitchen, she heard a noise and he was lying on the floor,” said Brewbaker. “Paramedics were on the scene immediately and performed CPR (cardiopulmonary resuscitation) all the way to Alpena. He passed at MidMichigan Medical Center.

“It is very sad, he was part of our chamber family,” said Andrea Konwinski, who took over for Randy as PCOC president. “He is going to be truly missed in our community.”

Randy served as master of ceremonies for the Miss Posen pageant; the Posen Potato Festival kickoff night at the flags; and continued to do the parade after his retirement from the chamber.

“He did a great job of running the show, that is for sure,” said PCOC member Jimmie Hentkowski. “He is going to be greatly missed in this community.”

He also was an assistant baseball coach in Posen for 15 years.

“Whenever you saw Randy, he always had a smile on his face,” said longtime Posen baseball coach Pat Kowalski. “He always came in with a positive attitude, no matter what was going on.”

In 2016, he was named a Division 4 assistant coach of the year by the Michigan High School Baseball Coaches Association. Randy stepped down when Kowalski retired.&

Current Posen baseball coach Greg Pietsch said the season has been dedicated to Randy’s memory. The ballplayers will wear stickers on their helmets; however, it has not been decided what will be on them.

Pietsch said he needs to talk with the juniors and seniors, “because he was their coach.”

“Randy was such a huge part of the Posen community,” said Wayne Karsten, former Posen high School athletic director and current softball coach. “He always had kind words of encouragement to the girls before every game.”

Karsten decided to honor Randy this season as well.

“I ran the idea of putting his name on our helmets past the girls and they were all in favor of the tribute. Our pregame talk (Monday) didn’t leave a dry eye in the dugout as we reflected on what Randy meant to the community and each of us. He will be greatly missed but always remembered,” said Karsten. “As a team, we send our condolences to the family as well as keeping them in our thoughts and prayers.