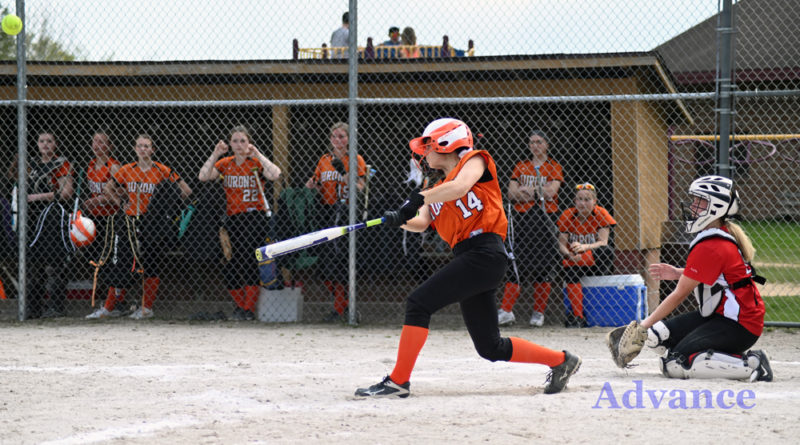 Posen and Rogers City squared off in the finals of the Wozniak Insurance Invitational in Posen Saturday with the Hurons coming away with the trophy with a 13-8 win in the championship game.

Rogers City scored four in the first and five more in the second inning to lead 9-3 before Posen cut into the lead with two runs in the third and two more in the fourth.

Ava Wesner and Kamyszek each had three hits for Posen as Kamyszek had three RBI with a double and a home run.

The Hurons made it into the championship game by topping Hale 8-3. Hale scored all three runs in the first inning using a leadoff single and three walks. But Krentz settled down after that, going one stretch where she retired 10 batters in a row. She allowed just three hits in the game.

Senior left fielder Chloe Hentkowski belted a home run in the game while Hardies and Kaitlyn Nowicki each had two hits for Rogers City.

Posen blitzed Hale in a 15-5 win in the first game Saturday. The Vikings had 14 hits, led by Kamyszek, Lizzy Romel and Abi Schellie with three hits each.

Romel earned the win on the mound surrendering seven hits and a walk with four earned runs. Posen had just one error in the game.

Last Thursday, the Vikings swept a pair from Hale 10-0 and 19-3. Kamyszek tossed a one-hitter in the first game picking up seven strikeouts while walking two. Romel led the hitting attack with three doubles. Haley Styma had two RBI. Hale committed five errors in the contest.

Game two found the Viking runners circling the bases 19 times in a blowout win. Posen had 19 hits and benefited from six Hale errors. Kamyszek had a grand day at the plate going 4-for-4 with a double and a triple. Romel, Wesner and Schellie each had three hits for Posen.

Romel got the win pitching all four innings while allowing four hits and two walks while striking out three. Just one run was earned.

The Vikings dominated Whittemore-Prescott (W-P) in a pair of home games, winning 17-0 and 16-0.

Kamyszek spun a one-hitter in the opener, striking out six batters while walking only two. Wesner had four RBI as Posen had six hits, walked eight times and had two batters hit by pitches. Posen scored 11 runs in the first inning and six more in the second to mercy the Cardinals.

Romel picked up where Kamyszek left off in the second game, surrendering only one hit and two walks over three innings. Posen mercied W-P with 13 hits, two walks and took advantage of seven errors by the Cardinals.

Faith Cousins, leading off and playing third base, had three hits and four RBIs while Wesner added three hits for Posen.

Grayling took a pair of one-run games from Posen, 10-9 and 18-17 Tuesday in Grayling. With the score tied 9-9 Grayling came up with a run in their final at bat. Posen had two big innings with four in the third and four more in the top of the sixth inning. Wesner had three hits for Posen while Cousins scored three times.

Kamyszek went all the way, charged with only three earned runs while striking out five.

Posen had 19 hits and Grayling banged out 18 hits in the wild second game. With Posen leading 17-15, Grayling scored three in the bottom of the seventh to get the win.

Wesner had five RBI and Romel and Kamyszek each had four hits in the loss.

Romel was charged with eight earned runs as Posen committed five errors behind her.

First place in the Big Dipper of the North Star League was on the line Monday, when Rogers City team traveled to Oscoda to take on the Owls.

Oscoda had beaten the Hurons two out of three times earlier this season in non-conference games.

Rogers City started off hot as Hentkowski led off game one with a home run, Krentz singled for the first of her five hits in the game, Nowicki walked, and then Dittmar singled in Krentz. Another run scored on an error and then Grace Garrison and Karissa Rabeau both had two-out hits to drive in runs and the Hurons led 5-0.

Oscoda scored one in the first and one in the second. The Hurons erupted for 10 runs in the fifth inning and the Hurons won by the final score of 16-2. Bruning was the winning pitcher pitching all five innings allowing two runs on five hits while striking out five Owls.

Rogers City was the home team for the second game and the Owls came out with some hot hitting and scored nine runs to start the game. The Hurons stayed calm and put together quite an inning of their own sending 20 batters to the plate scoring 14 runs to take a five-run lead after one, eventually winning a wild game 21-19.

Nowicki blasted two homers for Rogers City with Bruning getting the win on the mound.

Hurons’ hot bats were cooled down in the first game at Johannesburg on Tuesday by freshman pitcher Jaden Marlette in a 4-0 loss. She struck out 13 Hurons in the contest as the Hurons could only muster four hits. Bruning pitched her best game of the season in taking a tough loss allowing only four runs, all unearned, on six hits.

The bats got hot for both teams in game two and Johannesburg hung on for a 14-13 win to complete the doubleheader sweep. Nowicki had three hits including two long home runs. Dittmar had two doubles and a single, Bruning had two hits including a double.

The Hurons scored three in the first but the Cardinals came back with eight to take a big lead. Rogers City was down 14-8 entering the final inning and broke loose for five runs but came up one short in the loss.

Rogers City is now 8-10 on the season 2-0 in league play. The Hurons return to the diamond in Petoskey on Thursday, home on Friday against Alpena, at Mio on Saturday morning at 10 a.m, and then home on Monday with Newberry, home Tuesday with W-P and home again on Wednesday with Alcona.

Rogers City hosts the district tournament with Posen facing Wolverine in the June 1 pre-district game at 4:30 p.m. The winner will play the Rogers City in the June 5, 10 a.m. game.

Inland Lakes plays Onaway in the noon game June 5 with the championship game to follow.

Inland Lakes will host the regional tournament June 12 and the quarterfinal game is scheduled to be played in Rudyard June 15.

The Lady Cardinals split a pair of home doubleheaders this week against Central Lake and Pellston as the state tournament grows closer. Onaway will be playing Inland Lakes June 5 at noon in Rogers City. It’s also who is up next on the schedule, Monday in Tower.

The Cards took the loss in game one with Pellston, 9-4. Madison Reece (R, RBI), Macie Decker (R), Mackenzie Robbins (RBI) and Gavi Woiderski all had singles.

The bats came alive in the second game, a 19-12 victory, with Elissa Prow leading the way with a 5-for-5 game. She knocked in four runs, scored five times and ripped a triple.

Shelby Woiderski was 2-for-5 including and an inside-the-park homer. She added a double and brought three runs in. Reece was 2-for-3 with a double, two runs scored and a stolen base.

Shelby Woiderski was 2-for-4 with two runs s

Kyli Brewbaker led the offense with a 4-for-4 game, stroking a double, stealing a base and scoring twice.

The Lady Cards are 6-7 overall and 4-2 in the Ski Valley Conference.