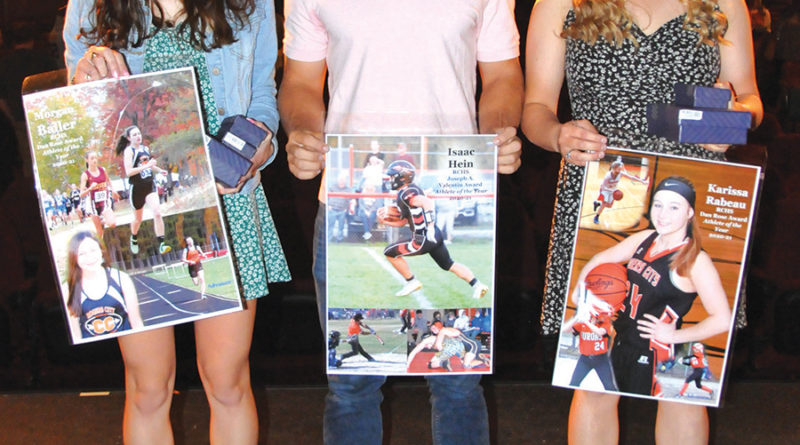 The end to the 2020-21 sports’ seasons for Rogers City High School took a turn to the normal. As athletic director Karl Grambau noted in his opening remarks, the athletes were glad to be able to play, even though some of the seasons were cut short.

Earning athletes of the year were three deserving seniors. Sharing the Dan Rose Award given to the female athlete of the year were Morgan Baller and Karissa Rabeau. Baller qualified for the state cross-country finals each of her four years and had standout seasons each of her four years in track and field. She earned the most valuable player award for cross-country and track and field.

Rabeau led the basketball team in several categories including scoring and rebounds and had an outstanding season as center fielder for the Hurons’ softball team. She earned most valuable player for basketball.

The male athlete of the year, winner of the Joseph A. Valentin Award, was Isaac Hein. He was the starting quarterback for the Hurons’ football team, an outstanding wrestler who qualified for the state individual finals during his high school career and a starting infielder and pitcher for the Hurons’ baseball team.

Hein won the Mark Smolinski Award for devotion on and off the football field as well as the most valuable player award for football.

Hein also won the James Quinn Award, given to the male and female athletes with the highest-grade point average. Cheyenne Bober, a multi-event performer in track and field and an outstanding cross-country runner, was the female winner of the award.

The John Geyer Award, traditionally given to a nonstudent who gives extraordinary support to the sports’ program, this year went to an extraordinary graduating senior. Andrew Darga, a devoted fan of Hurons’ sports, earned the prize this year. He also won the most improved award for baseball.

The Jolen Flewelling Award, given to a junior who participated in two sports, was earned by Ila Bisson.

The event was moved from May 19 to June 23 and hosted at the Rogers City Theater. Amanda Karsten, president of the Rogers City Hurons Athletic Boosters assisted Grambau in organizing the event.