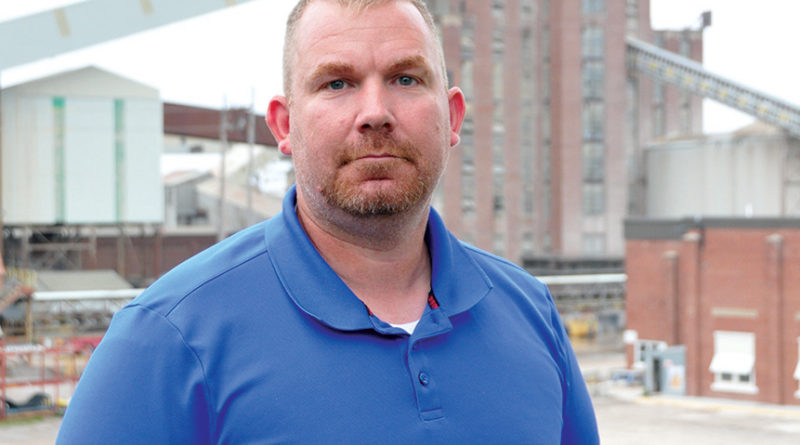 After months of job shadowing, Mike Cirino has fully taken the reigns as site operations manager at Carmeuse Americas (CA) Calcite Plant in Rogers City. He takes over for William deChangy, who after a family vacation in the states, is headed back to his home country of Belgium this week. Cirino officially took over at the start of production, April 1.

Cirino takes over the corner office overlooking the mill, coming from the Port Inland facility in Gulver where he had served in the same leadership role since 2017. He joined CA in 2013 as a production manager at the mill/dock, as well as the quarry at Port Inland.

The 2004 Michigan Technological Institute graduate worked for a road construction/paving company from 2003 to 2013, specifically focused on asphalt, project management and quality control. He decided to take the job with CA to stay in the Upper Peninsula (U.P.).

“With the degree I earned, that was number one,” said Cirino. “From a work life balance/perspective and having kids, it was time for a different career path.”

Plus, his wife Kristin is from Calumet. They have children ages 6 and 9.

“I really enjoyed the outdoor activities that the U.P. provides – snowmobiling, hunting, all those things,” said Cirino, who has a picture with his kids on a snowmobile on the wall of his office.

“I started here around Thanksgiving time. That’s when we moved the family from Manistique to the Royston area,” said Cirino.

“At that point, I was working side-by-side with William up until his recent departure in early June.”

“There are a lot of resources here to help me along as I transition into the role,” he said. “I’m looking forward to the future here and certainly CA’s willingness to invest in the long term. Between what I bring, what the Calcite team already has, and the backing of CA, I think Calcite has a great future.”

It appears Harbor View will re-open soon and Quarry View will likely be closed and relocated at the end of the 2022 summer season.

“Right now, stripping activities will continue outside of the current Quarry View platform,” said Cirino. “Within the next three years, that Quarry View area will be completely removed of overburden and relocated.

“I’m going to be working with local officials a

nd the Michigan Department of Transportation on what the next best place for Quarry View will be, possibly a roadside Quarry View would be the long-term option for us, further toward U.S.-23.”

In terms of Harbor View, the CA Calcite team is putting the finishing touches on it with a goal of re-opening and making it operational within a couple of weeks.

With high lake levels and erosion, the previous road location of the popular attraction for visitors and locals was becoming too difficult to maintain.

“We moved the road further inland and the access will be further toward the gate now,” said Cirino.