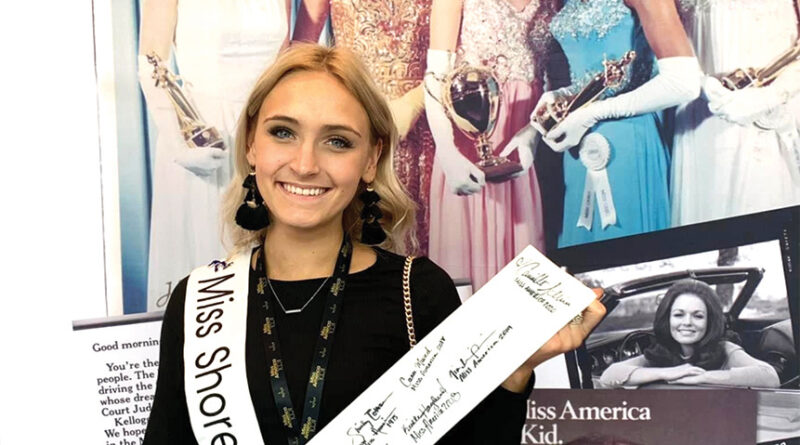 For MiKaela Bannon, entering and winning big-time pageants is nothing new. She has several titles in her collection and the experience of growing in her talents and confidence that comes with it. Now she has done something that has been in her dreams since early childhood. She and her mother Milissa Bannon attended last month’s Miss America Pageant, fulfilling a lifelong dream.

Milissa called her daughter at Northern Michigan University (NMU) and told MiKaela the plans to attend Miss America after securing tickets to the event. After competing at Miss Michigan last June, the chance to see Miss America came as a thrill.

“Because of the pandemic, our spring vacation was canceled. But we had vouchers for flight tickets. So, our flight was paid for already,” MiKaela said. “My 5-year-old dreams are coming true. I can remember Miss America on television for as long as I can remember and now to be part of the program is kind of full circle. To watch the girl, I competed with in June now compete with 51 other amazing girls is the experience of a lifetime.”

The Bannons flew out of Traverse City on the Monday of pageant week, a four-day event, arriving in time for the first night of preliminary competition. They watched the first round of talent competition, witnessing Miss Michigan Vivian Zhong perform. An award went to Miss Alaska Emma Broyles, who won the talent award in her preliminary round and eventually the title of Miss America.

As a local title winner, who competed at Miss Michigan, MiKaela had special privileges. She had the chance to see Zhong win a $10,000 scholarship for science, technology, engineering and math during an interview.

The Bannons stayed at the Mohegan Sun Resort in Connecticut, host of the event, for four nights and took in all that the pageant could offer. MiKaela, the current Miss Shoreline, had her sash autographed by each of the former Miss Americas at the pageant. This year the pageant celebrated its 100th anniversary by inviting many former winners back. She also attended a special breakfast with the current Miss America contestants and the past winners.

“This was the coolest thing that happened that week, besides the actual crowning of the new Miss America,” MiKaela said.

The crowning event took place Thursday, Dec. 16, 2021 with the winner earning a gold crown and scholarship money.  The field was narrowed to the final 10 and then to five leading up to the crowning.

Miss Alabama and Miss Alaska were the final two, which pleased MiKaela.

“At this point I really wanted Miss Alaska to win because she gave an answer in her onstage interview where she talked about the perspective of being Miss America while also focusing on yourself. She said ‘Miss America is not just a title to add to yourself. It is a microphone that can project into others. It is something that can inspire others and something that I want to do,’” MiKaela said.

The Bannons attended the afterglow where they saw the reigning Miss Michigan win $5,000 for the nonfinalist talent award and another $10,000 as the people’s choice. The week filled the mother and daughter pair with a lifetime of memories.

“It was unlike anything I had ever done in my life. My mom said it is going to become a tradition. So, hopefully we go every single year for as long as we can from here on out,” MiKaela said.

MiKaela will be competing in up to three more pageants with the goal of winning one to earn a spot back at the 2022 Miss Michigan Pageant. She will turn 20 this month, so she is eligible to compete until age 26. Her plan is to graduate with an associate degree in esthetician science this spring and then re-enroll at NMU to pursue a degree in multimedia journalism.

“I am very confident in myself and like what I do in this program. I am ready for this title, however if the title is not ready for me or if for some other circumstance some other woman is more ample for the title I will 100 percent get that,” MiKaela said.

For the first time in many years, the Miss America Pageant was not available on network television, only on the streaming service Peacock. The event had usually been conducted in September, but became a December event with the new venue.