Betty Randall Whiteley, born in Chicago March 14, 1918, passed away April 20, 2022 at age 104. She was predeceased by her husband of 70 years, Harry Whiteley; her daughter Janis Draper; granddaughter Shelly Draper; and parents, Jere and Goldie Randall. She is survived by her children Jere Whiteley, Robert Draper and Barbara Draper; six grandchildren; and two great-grandchildren. 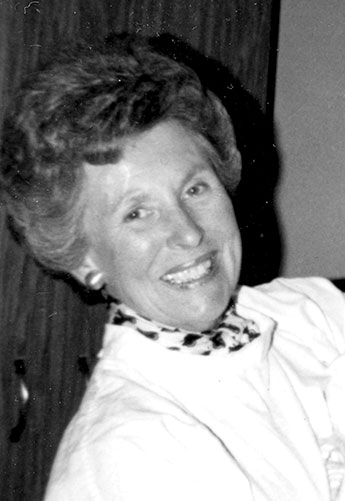 Betty was a tireless homemaker, cooking three square meals a day and preaching healthy nutrition, probably a reason for her and Harry’s long lives. She was also a caregiver, watching over her mom with weekly visits to Alpena, and her children, especially Janis. She was an active volunteer with the Rogers City Women’s Civic League and the Women’s Guild of Westminster Presbyterian Church, where she baked many a pecan pie for fundraisers. Betty loved to garden and was at her happiest tending her peonies and roses. She also was an active golfer, participating in a travel golf league and in the women’s golf league in Rogers City. Always a competitor, she might well be the only 92-year-old to have won first prize at the Spring Handicap Tournament at the Rogers City Country Club. (Granted, the size of her handicap was likely a record as well.) Betty was also an accomplished pianist and card player, played in a weekly bridge league for decades and was ready to take on any of her kids in a game of gin rummy.

Betty and Harry enjoyed travel, and their trips took them from the 1956 Republican National Convention in San Francisco that nominated Eisenhower to a second term, to Department of Natural Resources gatherings and Michigan Press A

ssociation outings, to Russia, and on cruises down the Mississippi and through Panama Canal.

A memorial service will be held in conjunction with her daughter, Janis’ memorial service at 2 p.m. Saturday, April 30, at Westminster Presbyterian Church. In keeping with her wishes, Betty will be cremated, and inurnment will take place in the Hoeft-Whiteley Mausoleum at Memorial Park Cemetery.

In lieu of flowers the family has suggested memorial gifts to Westminster Presbyterian Church, the Presque Isle County Historical Museum or a charity of your choice.