Ethel Marie Haney, 87, of Onaway, died at McLaren Northern Michigan hospital Sunday, April 24, 2022.  Born in Mio November 13, 1934, Ethel was the daughter of Chance and Marion (Schank) Pierce. Throughout her life, she married and was widowed three times. 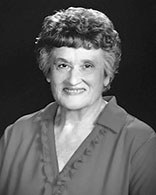 A longtime resident of Onaway, Ethel worked as a waitress at Eleanor’s Restaurant in Tower and in the office of Dr. Finch many years ago.  She moved to Arizona in 1988 where she began managing a medical office. Under her very organized and precise supervision, the Women’s Health Facility of Yuma grew from a few employees to a multilocation medical group with more than 200 employees. In 2020, after 30 years in Arizona, Ethel returned home to Onaway.

Being the mother of four sons, Ethel learned early-on how to run a “tight ship.”  She loved her family dearly, was nurturing, yet firm with her sons as they grew from boys into men. She knitted socks, mittens, and hats for them to wear and was a wonderful cook who made the best choplets and macaroni with tomato soup. Quite a jokester, Ethel had a unique sense of humor. She was blessed with the gift of sarcasm and could be quite sly in her comments. Like a slow burn, it sometimes took a minute to realize Ethel had made a funny remark.

Dedicated to her faith, Ethel was a member of the Onaway Seventh-day Adventist Church and the Seventh-day Adventist Church of Yuma.  She was very involved with church activities; she served as the church and school bookkeeper at the Onaway church, as well as singing in the choir, both in Onaway and Yuma. Not only did she read the Bible, Ethel also read many books and watched videos pertaining to God, religion and her church. With her angelic voice, she often sang her favorite hymns as she went about her day. Living her faith daily, Ethel was kindhearted and never said a cross word to anyone.

Ethel was preceded in death by husbands, Jack Burgess, Robert Campbell and Duane Haney; a grandson, Tracy Burgess;  a daughter-in-law, Janelle Burgess; a brother, Art Pierce; and a sister, Lavina.

Visitation will be held at the Onaway Seventh-day Adventist Church today (Thursday, April 28) from 11 a.m. until the time of the funeral beginning at 1 p.m.  Ethel’s cousin, the Rev. Richard Rettzloff will officiate. A graveside service will follow at Hillcrest Cemetery. Those planning an expression of sympathy please consider a donation in memory of Ethel to the Onaway Seventh-day Adventist Church.  Arrangements are in care of Chagnon Funeral Home.