Craig E. Stevens, 61, of Davison, died Sunday, May 29, 2022 at Ascension Genesys Hospital in Grand Blanc. The son of Earl and Betty (Walters) Stevens, Craig was born in Flint January 6, 1961, was raised in Davison, and graduated in 1980 from Davison High School. 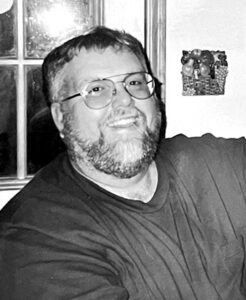 Although Craig didn’t live in northern Michigan permanently, his roots were deeply planted in the Onaway area with both of his parents being born and raised in Cheboygan County.  Countless weekends and vacations were spent with family in Tower while Craig was growing up.  It was during this time he met the love of his life, Suzanne “Sue” S. Church, and needless to say, his trips to northern Michigan became more frequent.  On December 24, 1986, Craig and Sue married at the North Detroit United Methodist Church. They made their home in Davison where Craig worked as a dump truck driver for Delta Paving, putting in many long hours during the Michigan road construction season.

Quite handy, Craig was a skilled welder and a pretty good mechanic. After wrenching on motorcycles, snowmobiles, and tractors under the supervision of his dad, Craig could fix just about anything. In fact, he always said, “I can fix anything, even a broken heart. It just takes me a little longer.

Hunting, fishing, hobby farming, and love of the great outdoors were part of Craig’s family heritage and were deeply ingrained in his soul. Craig never missed deer season and loved to fish, anywhere, anytime!

And though he didn’t have any children of his own, Craig passed this family tradition on to his nieces and nephews, teaching them gun safety and how to properly shoot a firearm, how to bait a hook and remove a fish from a line, and to have a love and appreciation for nature.

He was an avid snowmobiler, riding hundreds of miles through the forests of northern Michigan and also loved to ride motorcycles. He cherished his Honda Gold Wing, but even more he cherished the rides he took with his dad or when he and Sue would go for a nice ride on a beautiful day.

And again, Craig shared yet another passion of his with his nieces and nephews, teaching them how to ride a motorcycle on the little 90 cc he bought just for them.

Craig loved his family dearly. He was a devoted husband to Sue. The two were soul mates and made a great team. He respected and loved his parents and was the best of friends with his brother. He adored his nieces and nephews, giving them the gift of his time, his advice, and his love.

Uncle Craig loved to spoil them but also didn’t let them get away with misbehaving.  He loved to talk and easily made conversation with friends and strangers alike. And he loved hugs!  Most of all, Craig’s greatest love was for his Lord and Savior, Jesus Christ. Devoted to his faith, Craig turned to his Bible each day. Even after an automobile accident left Craig with limited mobility and confined him to a wheelchair, his faith never wavered. He believed love was the greatest virtue and the greatest commandment. Craig lived his faith each day by loving God and loving others.

He put others before himself and would help anyone, day or night. He was kindhearted and generous to those in need. Craig was a member of the Elba United Methodist Church and volunteered for many worthy causes, including selling bottled water during the Onaway Fourth of July parade to benefit the Children’s Heart Foundation.

Craig’s large stature was nothing in comparison to how enormous his heart was, how big his personality was, and how much faith he had in God.  His insatiable zest for life, his love for his family, and most of all, his love for God will always be remembered by those who knew and loved him. He will be sadly missed but find comfort in knowing that in his final moments, Craig smiled as he said these last words, “I’m going to see Heaven today!”

eson of Dryden and Amy (Donald) Crawford of Onaway; as well as many nieces, nephews, cousins and friends.  Craig was preceded in death by his parents, Earl and Betty Stevens; and his mother and father-in-law, Judy and Jim Church.

Craig’s family received friends at the Onaway United Methodist Church Friday, June 3, until the time of his memorial service.

The Rev. Corin McDonald officiated with a eulogy by Cameron Penny. Craig’s final resting place is in Tower at Forest Lawn Cemetery.

Those planning an expression of sympathy please consider a donation in memory of Craig to www.childrensheartfoundation.org.