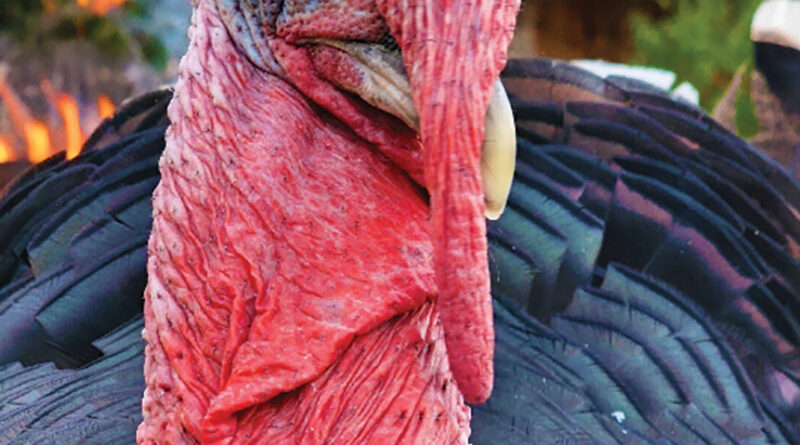 There is a lot to be concerned with these days with inflation, the war in Ukraine or even the political divide facing this country. That’s just a start. It’s a lot to fret about, if one stops and thinks too long.

For turkeys, their only concern is the national holiday known as Thanksgiving, because Americans love to eat lots of turkey.

There are special turkeys that get to live to Black Friday, like the one that’s pardoned by the President of the United States.

And yet another turkey’s life gets spared by Santa Claus at the North Pole. Not many people know about this news happening, but it has to be true because it comes from the website, Northpole.city.

While most turkeys have their nervous feathers in a bunch, that’s not the case for Clark the Turkey in Hawks, who is a friend of the family, not food.

The Hickel family, recent transplants from Livonia, who gave up city life for country living, claim Clark to be the mascot of this Hawks’ farm.

Named after Clark Kent, but acts more like Clark Griswold, this beautiful bird has stunning feathers and an equally impressive physique. It’s his big personality that has this family, and anybody else who meets him, smitten.

When the roofers were at the farm to make repairs from the May hailstorm, Clark was there for moral support and to harass the crew.

“He would take tools out of their tool buckets and staples out of the boxes, anything shiny. Right, Clark?” Ashley Hickel asked the bird a few feet away.  Ashley and her husband Ron are raising their three children, Brianne, 15; Jesse, 8; and Oliver, 5.

“Any project we are doing, he is right there,” Ashley continued. “Plus, he shows off, wanting to make sure everybody sees how pretty he is. He will turn his fan toward you, so you can see it.”

“I think he is really cool,” Ron added. “It’s probably our fault for babying him when he was little. I used to lay a towel on my chest and watch TV, and it was early in the morning and everybody was sleeping, he would fall asleep on me and I would pet him.”

And when Brianne brought a few friends over, Clark would trade gobbles for giggles. “It was like he was totally involved in their conversation,” said Ashley. On the first day of school, Cl

ark stood by the front door bewildered, wondering where everybody had gone.

Being a broad breasted bronze, a species of turkey raised for meat, the family is hopeful for a super long, happy life.

“Some people have had luck keeping them for five to six years…as long as we can keep him lean and his legs can support his body,” Ashley said.

On Thanksgiving, he will be at the center of all of Hickel’s family activities. “Wherever we are, he is, right Clark?” she asked him again. Clark’s expression remained the same with not even a crinkle of flappy skin.

It does not matter, Clark’s large and in charge on the Hickel farm.