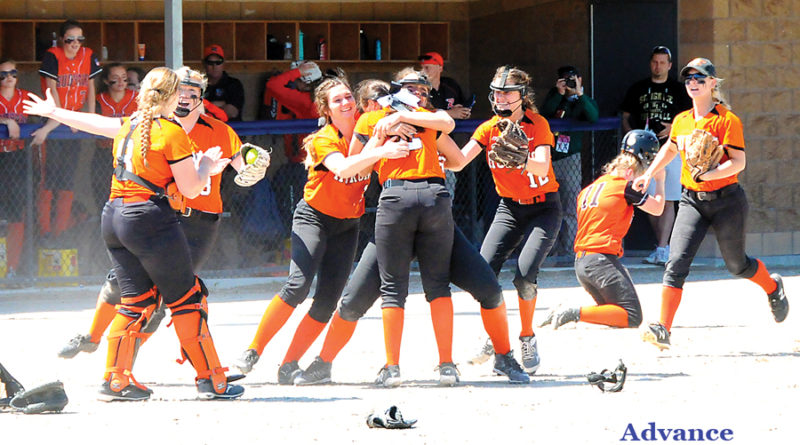 That was fun, let’s do it again, seems to be the theme of the Rogers City softball program in recent years. After a trip to the final-four last season, the team reloaded for another trip to East Lansing and a shot at the Division 4 state championship.

The Lady Hurons will face Unionville Sebawaing Area (USA) in Friday’s state semifinal game at 12:30 p.m. on the campus of Michigan State University. Rogers City earned its second consecutive trip to the state finals and the program’s fourth in the past seven seasons after beating Rudyard 2-1 in the state quarterfinals in Petoskey.

The Hurons defeated USA 4-3 in top-rated Coleman’s tournament earlier in the season before losing 11-1 to Coleman in the same tournament.

In Tuesday’s quarterfinals, a key two-out double to the gap in left-centerfield by number nine hitter Karissa Rabeau knocked Alissa Bowden and pinch runner Linnea Hentkowski with the winning runs. Rudyard, who split a doubleheader with the Hurons two weeks ago, looked for revenge as the Hurons topped Rudyard on the same field in Petoskey last season’s quarterfinals.

With one out in the critical sixth inning, Bowden reached first as the Rudyard first baseman could not handle a throw from shortstop. Kyley LaFleche dropped down a perfect sacrifice to move Bowen to second. A wild pitch advanced Bowden to third and then designated player Brooke Saile, who had doubled in her first at bat, drew a walk. With Hentkowski on first, Rabeau, a sophomore centerfielder, worked the count, allowing Hentkowski to steal second. This proved to be critical as Rabeau drilled the next pitch to the fence scoring both Bowden and Hentkowski allowing the Hurons to take a 2-1 lead.

That would be all the margin Hurons’ ace Kyrsten Altman needed. She set down the side 1-2-3 in the sixth and got the first two in the seventh before allowing a hit. A wild pitch and a steal of third put the potential tying run on third, the Rudyard coach called for a steal of home that didn’t work, as Huron catcher Amanda Wirgau ran down the runner before flipping to third baseman Catheryn Hart for the tag.

Base-running errors nearly spelled doom for the Hurons earlier in the game. In the first inning, senior shortstop Taylor Fleming drilled a one-out double to left, but was cut down trying to steal third. In the Huron half of the third, Bowden reached base on a walk, but was thrown out trying to go from first-to-third on LaFleche’s bunt single.

Rudyard got its only run of the game in the fourth inning off a leadoff single and double. Altman struck out eight and allowed just three hits and a walk.

Rogers City had seven hits with Rabeau getting two.

The experience of going to the state finals last season should bode well for the players, Grambau said.

“I think this is the one thing this team has is unity. They pull for one another all the time,” he said.